The Aunt Goes Marching One by One 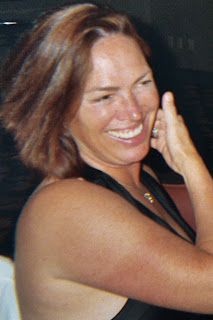 My kids recognize three aunts by sight: Pete's sisters Michelle and Christine and my sister Ginny. Pete has another sister, Janice, that the kids might be able to pick out of line-up, based on familial appearance, but it's only been this past summer that they actually met her for more than an hour or so and when they were older than toddlers. That's it for the blood aunts.
With three brothers, you'd think I'd be able to procure some of them by-marriage aunt types. And, in fact, all three "boys" have married. And divorced. The eldest, the Jehovah, has been re-married for nearly 20 years. Unfortunately, I've not seen him since 1992, or right before the great conversion. [I'm not sure if it merits a post or two. Maybe someday. In fact, I don't really ponder him and his very often.]
There's another aunt, the kids' great-aunt, who the kids are as close to as they are to Michelle and Ginny. That's Aunt Margaret. She's the wife of Pete's Uncle Ken. (And a fine woman in her own right, thanks.) It is with Margaret and Ken whom we spend the bulk of our time with when we're in England. I could write volumes on the two of them.
But this is a post about the one and only American aunt who the kids know, my sister Ginny. The kids adore her. Me having a sister like that gives me street cred with my kids. I can't be such an old fuddy-duddy if that's my sister. She's the aunt kids crave (and parents sometimes cringe at). Sugar-them up, frighten them to death, run around crazily with them, disregard all rules, rile them up. And then leave. A whirlwind day or two is what we get to spend with her typically. She's brilliant. She's funny. She acts one-quarter her age. She tells Ryan he's her favorite nephew. (Thankfully, never in front of Luke.) All told, she can't be beat.
We live for her visits from sunny Santa Monica. She was to arrive this morning and stay until Sunday night, coinciding with our mom's weeklong visit. Sadly, brilliant people being inclined to do brilliant things, she's had to cancel because of work. With Sammy and Luke both down for the count illness-wise, they've taken it okay. Ryan? I'll be lucky he's speaking to me once he finds out. For Ryan, there's only one aunt.
at February 16, 2007