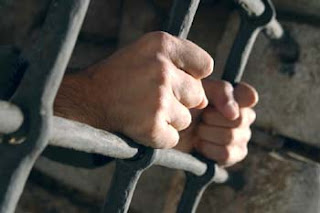 My parents were much more strict than I am. And, my goodness, what an understatement that is. Pete's parents were also more strict than he is. And when I say "parents" I primarily mean "fathers," although my mother was certainly perfectly capable of doling out punishment. But it was her threat to tell my father upon his return that had the five kids (mostly) toeing the line.

But I rebelled, of course, which is natural for kids. And when I was young, from about 5 to 8 or so, I would punish my parents whenever I was sent to my room. I'd be as annoying as possible. I'd sit in my room and kick the door against the door stop. It would make such an annoying, rhythmic noise. "Smack. Boing. Smack. Boing. Smack. Boing, boing, boing." And I'd do it over and over again. Until my mother would yell at me to stop "RIGHT THIS INSTANT."
My father wouldn't have said that because I don't think I would have dared do that if he happened to be in the house. To get even with him when he punished me, I just wouldn't talk to him. So there!
Fast forward way too many years to my home today. The 10-year-old boy never punishes me in return, and he dutifully goes to his room. Ticked, yes, but he goes. The 8-year-old girl never, ever does anything in retaliation. But then she's rarely ever punished because she's about as near-perfect you can be.
Then there's Luke, the 4-year-old defiant one. His latest thing? Oh, he'll go to his room, all right. But he'll show me because he'll lie down on the floor and have his head out of the room. Hah! And when told that his head has to be in his room, too, he'll just grit his teeth and growl, and then he'll proceed to bang on anything but the drum kit in his room. Or he'll open and close his door. Not slamming it, mind you, because that would get additional punishment piled on.
You know the beat he plays while he's banging on something or opening and closing his door? It sounds something like, "Pay-back-time. Pay-back-time. Pay-back-time."
at February 24, 2007