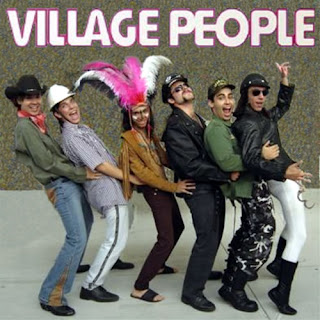 I'm not sure how I'd make the sign for "School." Maybe reading a book (like from charades). Perhaps a thoughtful tilt of the head, looking skyward as if searching for an answer hidden deep inside my brain. No matter. I don't think it would be a hit like the original, but perhaps we could find some too-old-for-their-age eight year-old girls and have them do it as a cheer. I'm not sure if that would help or hurt.
You might recall that I went to my first PTA meeting in December. By no means am I casting stones at the fine folks who regularly attend these meetings. It took me more than seven student years to show up for one. This one was at night. And a rainy, rainy night it was. And the final rehearsal for the talent show -- which is tonight or tomorrow night -- was going on at the middle school. And, as I said last time, 6:30 p.m. is right about the time I was walking in the door from work and we were getting ready to eat. I'm guessing it was dinner time for a lot of folks.
Is it any wonder that there was no quorum? That we sat until 7:15 p.m., waiting for someone who had been phoned at about 7 p.m. and begged to come to arrive? All so that 15 folks would be there. I offered to pay the janitor or a neighbor to come and join. Not to be.
And so the principal gave her update, because no quorum was needed. And what an update it was. Typical school stuff. You know, the homeless folks walking by the classrooms on their way to the shelter in the creek. The juvenile trying to break into the back doors. The six teens shooting off an air gun at the creek. Where the homeless people had just gone. (To their credit, it appears the shooters didn't know anyone was there.) The couple of teenagers about to do the dirty deed on one of the school lunch tables.
Say what?! It was amazing. And almost none of it was duly recorded for the minutes. (I'm wondering if that's allowed. If you can go off the record. I don't really care. I'm just curious.) [Or maybe I do care. I'll have to get back to you on that.] You've got to actually go to the meetings to get the whole scoop.Who would have thunk it? That our safe school in our safe neighborhood in our safe town in our safe county would have all this action?
With the exception of the homeless people, I'm going to have to say this sounds like any old school in Fairfax, VA, where I both high schooled and went for early elementary grades. Only instead of hearing about it at the PTA meetings, I was part of the groups of people who were trying to break in (just on a dare), setting off fire crackers, shooting BB guns, making out, etc. (We'll leave the "etc." alone, thanks.)
Fast forward too many years and I am now posing as the indignant one. But it is a pose. Because I do have these vague memories of looking for adventure as a child. But not wandering too far from home to find it.
[Per the post yesterday, I've decided I'm going to go with mojo-mojo instead of mofo. I'll know what I mean. The kids will think I mean something else.]
at February 09, 2007