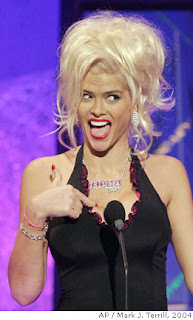 I'm a former San Francisco Chronicle employee. I still work with a few people there -- specifically Mark Fainaru-Wada, Lance Williams and Phil Bronstein -- on the battle to get the federal government to back off with regard to compelling Mark and Lance to give up their source(s) of grand jury testimony. You can read all about the battle here or here. I understand how the newspaper business works, for the most part. I know that headline writing is an art. That it's almost always done by copy editors, not the reporters. That deadline pressures abound. I get all of that.

But I also think none of the intricacies and difficulties matter if an error is made. And I'm so annoyed with headlines in today's Chronicle regarding the death of Anna Nicole Smith. You can't tell on SFGate what the jump headline is. But you can see what the subhed is on the front page article on The Gate. While you look, I'll copy and paste it below.

The headline itself is Unlikely icon a mix of glamour and tragedy. The subhed is: To many women her age, it's like losing a girlfriend. And the headline on the jump page in the print edition is : To women, Smith's death like loss of a tragic girlfriend.