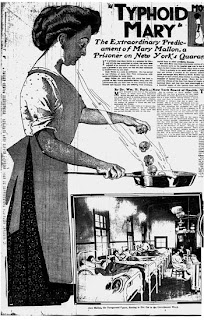 Sammy is our little self-regulator. From her earliest years, she would ask to take her nap or go to sleep. Back then that could be attributed, at least in part, to the fact that by the time she was just over two, we only let her have her plug-plugs (pacifiers) when she was taking a nap, sleeping or riding in the car. But her sense of her own needs remains. Nearly every night, it is Sam who suggests it's her bedtime.

We've been extremely blessed in the health arena when it comes to the kids. You can count on one hand the number of times each child has been ill. That's a good thing, too, because they are, as a clan, very anti-medication. I believe I've mentioned Luke's aversion in particular. But he's not the only one. Sam is as bitterly opposed to the use of OTC drugs as any Christian Scientist you could happen upon. We're not a happy home if any child is in need of drugs.

Yesterday, Sammy came back from acting class and decided to lie low for the rest of the day. In fact, she fell asleep a couple of times. No real fever. Although she felt warm to my touch, the thermometer proved to be a better judge of fever than me. She was only complaining about a scratchy throat.

This morning, again, no other complaint from her except the throat. But she decided she was okay for school today. Her face was flushed. (It always is, actually, but it's a different flush today.) She didn't want any throat drops. Of course not, as they are most definitely medicine, right? I offered to get her some candy to soothe her throat. I didn't even get into the, "We'll fake the teacher out and tell her they're cough drops." Sam shut me down before I could offer up my plan.

So Sammy went off to school with no fever, slightly more flushed cheeks, a scratchy throat (which, by the way, isn't preventing her from eating), armed with the desire to be well so she doesn't miss a thing. Crazy chica. Crazy madre. I always let them decide if they should stay home or go. (Well, not Luke.) Here's hoping she's not contagious. I'd hate to see a notice come home like the one we got on Friday indicating it's pink eye in the classroom. I'm pretty sure it's not typhoid.