I've Not Forgiven Woody Harrelson Either 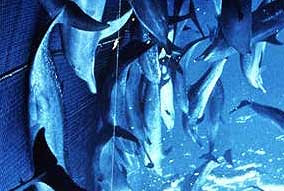 It's been more than 10 years since my hate affair with Woody Harrelson began. If there's one way to turn someone like me against you, it's block traffic as a means of protest. Harrelson and pals did it in November 1996. They snarled traffic on the Golden Gate Bridge for more than five hours as they scaled a part of the bridge, put up a banner and sat. And sat. And sat.

What were they protesting? I was going to say who gives a crap, but I'll save you the trouble of looking it up. They were protesting the feds' deal regarding a grove of old redwoods. I am not Ronald "You seen one redwood you seen 'em all" Reagan. I lean substantially more on the side of environmentalists than I do on "the other side."
But I so vehemently disagreed with his actions, that I swore off ever seeing another movie of his again. Okay, I wasn't that big of a fan to begin with as I have a mega-aversion to ultra-violent films like "Natural Born Killers" or any film that glorifies the horrid Larry Flynt.
Does my distaste for the man and my avoidance of any film he has matter at all? Not to anyone but me.
And don't I feel just a little silly about how I make my decisions? Maybe. A little. But not enough to go see a movie he's in.
What's this got to do with anything today, more than 10 years later? Well, I was taking my lovely daughter to a bowling party in San Rafael, not too far from the Canal District. Have you heard about the arrests there by Immigration or whatever the hell they're calling themselves nowadays? Early-morning raids in San Rafael and Novato, scaring up the illegal immigrants who have already received deportation orders. Oh, and like the Japanese with their tuna nets, scooping up some innocent (and some not-so-innocent) bystanders at the same time. Including a 7-year-old kid.
I'm not pro-illegal immigration. I'm pro-immigration. I've already talked before about having to possibly turn in my liberal card on this. I don't condemn the feds for deporting illegal immigrants. Go for it. I condemn how they're going about it. I condemn terrorizing people. I condemn them not going after bigger fish.
Guess who's out protesting the raids? No, I don't think the Wood-man is there. Just your average Joes and Janes. Snarling traffic. Pissing people off. Making me get back to my kids later than expected. More stressed than expected. More ticked than expected.
You want to sway people to your side? Don't screw with their ride home. Their body clocks are all messed up. They're a bit off already. Let's take to the streets at lunch hour. How about it? Because I really don't want to join the Kevin McDonalds of the world.

[A side note about the link to The Chronicle above. I could have linked to the "old" Examiner article the day after the protest, but I didn't. And I didn't because the reporter who wrote the story, a "gent" by the name of Craig Marine, was busted in 2002 for sexual assault of a former teenage neighbor. I just felt icky linking to his story. I don't know what the resolution ever was, but news accounts at the time indicated he confessed to some of the allegations. There's my warped sense of morality rearing its head.]
at March 12, 2007