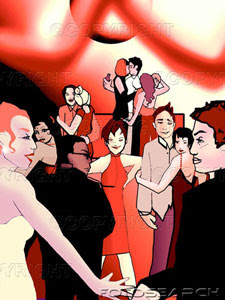 For a time at The Chronicle, I was in charge of the marketing department and all that entails. One of my least favorite tasks was the advertorials that the lunatics in the advertising department would come up with. Typically, the worst of the horrific would fail to sell, and we'd all be off the hook.

In Wednesday's Chronicle, there was an advertorial called "Prom 2007." You know what an advertorial is, yes? It looks remarkably similar in content to the newspaper's legitimate news stories. There are pictures, headlines, stories, bylines, etc. But it's written by the marketing department and it's labeled as advertising (in kind of little type) and it doesn't use the same fonts as the news side of the business does. Too confusing? Here's what wikipedia says.

The 16-page tab section has plenty of articles. You can see Prom 2007 here. [I'm not sure how long the link works but it'll be there for at least a week.] There are lots of ads in the section from places which sell gowns, from limo companies, tux rental places, and Planned Parenthood. Planned Parenthood wants you to have a safe prom! Remember Safe is Sexy! Here's the ad.

There aren't many prom-attending kids reading The Chronicle. Heck, there aren't that many prom-attending kids reading any newspaper. So I'm assuming this is really aimed at their parents to say to their darling sons or daughters, "Ooooooh, look at this. Look at these articles, like what to eat on the big day, how to do your hair, what to do after the prom, and all that." I'm also assuming there are going to be quite a few who see the Planned Parenthood ad and ditch the whole damn thing rather than share with little Janie or Johnny. And, yes, I believe the ditchers care more about little Janie seeing it than little Johnny.
If I'm surprised by the ad, and I'm liberal, I've got to expect that there is some shock and disdain out there among the less liberal than me. Frankly, I don't want my kids having sex when they're 15 or 16. And, yes, I know that it's starting even earlier for many. But I sure as hell hope that my not wanting them to be having sex doesn't translate into my not wanting them to be protected if they do.
Let me ignore the little things they do, like skipping classes once in awhile or toilet-papering someone's yard or staying out late. Please don't let me be one of those parents who thinks it's better to not know that Ryan is drinking or Sam is doing drugs or Luke is having sex. Please don't let me ignore the things that can kill them or ruin their lives.
I've spent their whole lives ensuring their protection. I'm counting on continuing to do that no matter the discomfort it causes me. Or them.
at March 15, 2007