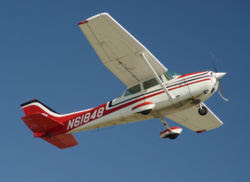 Once upon a time, before there were two sons and a daughter, and even before there was a woman, there was this finance guy. He had plenty of disposable income. He drove a fancy car. He had lots of credit cards. He had a pilot’s license. He didn’t have enough disposable income to own a plane, but he had enough to belong to a flying club, so he could fly the small planes he was qualified to fly whenever he wanted.

And fly them he did. He flew from the airport in San Carlos to many different places. He flew up and down the coast of California. He flew into the most majestic spots in the interior of California, in Oregon and in Nevada. On a pleasant sunny Saturday or Sunday, he’d get a yen for a hamburger from a great burger joint hundreds of miles away. And he would hop aboard and soar away and fill his desires.

With his wings, his life was filled with excitement and exhilaration. Winged, he had adventure and he had beauty. Wings gave him a sense of ownership of this part of the world. Wings gave him freedom, far above a world of responsibilities. Those wings made the man.

Then the finance guy met a woman. And if it had only been the woman, the wings could have remained outstretched, always at the ready. But, alas, it was more than just the woman. The wings have retracted. Spiders and other creatures of the storage area have made their homes in the crevices of the wings. Discarded cradles and strollers and Christmas ornaments and other more frequently used items are at the forefront of the storage area.

There’s still excitement and exhilaration, but they come from the sidelines of T-ball and soccer games. There’s still adventure and beauty, during the dance recitals. He still has a sense of ownership of this part of the world, but it comes with a mortgage. The freedom? It’s been replaced by a world of responsibilities. It turns out the wings didn’t make the man. The man made the wings.
[A Sunday Scribblings post. See more here.]
at April 28, 2007

But wings can be found anywhere. You just have to look for them. They can be hidden in the most strange or awkward places. Parents usually find them in the smiles of their children.

Thanks for visiting my place.
Nathalie

Wonderful story and his wings are still there. He probably would not change a thing and will dig out those wings and fly again.

patois,
It's as it should be. Everything has it's time, that's growth. ;-)
Nicely told.
rel

I love your banner design!

Thanks for stopping by my blog. I look forward to exploring your posts.

i think he's still flying. even though he's still closer now to the ground.
thank you for the birdy comfort!

I enjoyed reading this, I think the man found a different way to fly.