Fr. Phil, guitar teacher extraordinaire, rock band member and spiritual head of our church, has been doing TV Out Week for a number of years. It’s always the week between Palm Sunday and Easter. And my children have always balked at participating. Under the oversight of a weak mother, they’ve always been able to pass the opportunity up.

Until this year, that is. This year, we took part. No TV. No DVDs. No video games – handheld or otherwise. No computers. And we were all in it together. Oh, except Pete. And me.

Guess what? They found countless other ways to amuse themselves, and their forms of amusement, more often than not, did not include driving a sibling, a dog or, most importantly, me crazy. They were jumping on the trampoline. “Dead lady, dead lady, come alive. Dead lady, dead lady, run for your lives.” They were living in cardboard boxes. Together. They were playing cards. With each other.

There were still countless episodes of bickering. They were still themselves, after all. But the outbreaks were either less frequent or less grating on my nerves. Maybe the bickering wasn’t any less intense, but they didn’t argue over something as meaningless as television shows. [As if their non-television arguments are somehow meaningful. “She’s singing!” “He keeps drumming.” “He’s trying to scare me.”]

Fr. Phil is no slacker in the outlandish, select-your-own-bit-of-crap prize set-up either. Anyone 12 and under who did TV Out Week got something for their trouble. Ryan picked out a journal. Good enough. Luke got nothing because on Friday he caved. He could take it no longer. “I want to watch TV.” Consequences explained, he soldiered to the television for all of 42 minutes. But it was 42 minutes too many to qualify for a prize. But he didn’t care. ‘Cause he watched TV. So. There.

Back to the prizes. Fr. Phil, catering to the base desires of tween girls, not only had make-up – which caused quite the clash between 7-year-old Isabella and her parents – he also had a horrific Barbie-branded winged creature called Elina. That comes with her own DVD! And you can play games with her! Yes, you can fly her to play the DVD game! And her wings flutter! Wow! 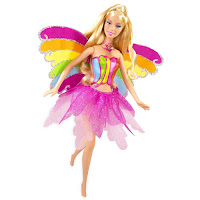 Yeah, Sammy picked that out. Thrilled right down to her spankin’ new witchcraft shoes. The makers of evil flying Barbie, prepared for older brothers everywhere, thankfully included this very helpful note, dug out of the recycling bin by me, “If wings do not work or flutter out of control, use a pen or paperclip (not included) to press the RESET button on the back of the doll as shown.”

“Out of control?” That’s putting it mildly. I was ready to drown that fairy.

I could so use a little RESET button on my back.

What a cute blog. I'll be back to visit. Thanks for visiting Mimi Writes.
Hope your Easter was blessed and happy!