It's a Photo 10 on Tuesday this week. We're supposed to share the 10 favorite pictures we've taken. I didn't go to my many, many photos taken before I got a digital camera. I also didn't limit it just to the photos I've taken, but I've instead included a few taken by Pete or a friend.

Why are these favorite pictures? Because they all call to mind something about a precious place and time in our lives. Because they can move me to tears by remembering.

Want to see quality photos? You'll need to check out others' 10 on Tuesday pictures here.

Anyway, in chronological order, some photos, and comments.

My all-time favorite photo of a little Ryan, taken while we were driving over to one of those houses with the many, many Christmas lights. He's holding his blanket. The blanket: 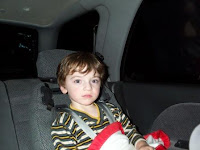 Ryan and Sammy, playing in her crib, with Sam just up from her nap, plug-plug (as always) in her mouth). It's how I wanted them to be as siblings. It's not as they are today: 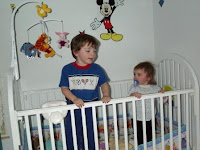 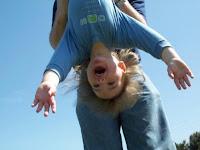 She loved the plug-plug. She loved Blue's Clues. This typifies the happy Sammy, the girl who could light up a room with her laughter and joy: 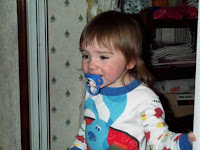 At the old house, Ryan at nearly 4 playing a Winnie the Pooh game on the computer with Sammy watching right along. The good big brother, showing his sister how to do things and playing with her. You won't see that again nowadays, unless its Potter Puppet Pals: 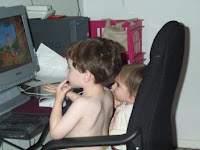 A newborn Luke, sleeping. And Sammy blurred in the background. I think she felt that had happened in reality: that she had been relegated to blurred-out background status: 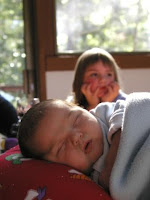 Sammy as a 7-year-old. What do I like about this? She loves having her face painted, yes, but I like it most because I know it's January and she's in a thin Hawaiian dress. The stares I get when I let my children dress themselves: 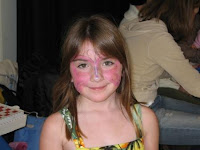 The two men with Maria on their cousin's wedding day. They look so grown-up: 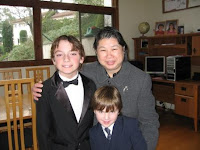 Sammy as the maid of honor for Amanda. She was so proud to be asked. She took it so seriously. She loved everything about it: 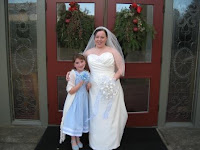 The Luke of today. Why this photo? He very nearly always makes that gesture when his photo is being taken. 'Cause he's cool. I suppose it could be worse. It could be another gesture: 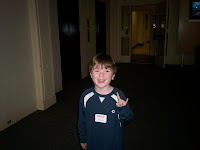 Email ThisBlogThis!Share to TwitterShare to FacebookShare to Pinterest
Labels: Tuesday10

Great pictures! You have some good looking kids. I might try to post some later. I don't have my collection here at work. :)

I LOVED your pics. #6 especially.

In my opinion, there's absolutely nothing better than pictures of children. (Now if I could just have some of my own!)

Thanks for sharing. Have a blessed week!

My fave is the pic of newborn Luke :)

Thanks for visiting my meme blog...

love, love, LOVE Sammy upside down and the newborn, Luke!! All ten are terrific photos.

My first Tuesday 10 is posted.

Awww...your kiddos are so sweet! I love the computer shot and then also the one with your baby in the foreground...really nice!

I absolutely LOVE the one of Luke and Sammy!!!! WOW! What a great picture!!!

Thanks for stopping by! I think you underestimate your photo abilities! :) Great job!


Have a great week!

I was adoring your pictures when I saw that darn A-list blogger button and I just had to check and make sure it was real. No Fair! Maybe instead of going for hits I need to focus on links. Anyway,
Blues Clues, Maid of Honor, and the fact that she is named Sammy. My gosh your daughter is one lucky girl. I may have to reconsider naming my daughter to be Sammy instead of Ariel. I can't pick a favorite because I too had a blankee that I always had with me. It doubled as a cape. And the fact that he is using a computer makes him cool.

Your respectful disagreement on my post really made me think--thank you for that...

Beautiful pictures - I can tell why they're favorites!

Great pics! Your kids are all so adorable. Love the one with Sammy upside down. :D

I too love the upside down shot. It captures the essence of childhood perfectly.

oh i love every one of them!