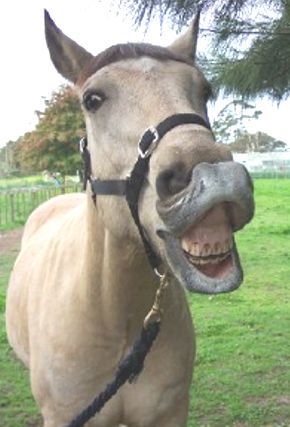 My cousin Paula is working hard to save the one-room school in her town. Coming in from a protest, she tells a bunch of us she's going to be on the news that night. Her mother says, "It's too bad your hair wasn't done up pretty like it was last night." I laugh uproariously and say, "Now that's something for the blog."

When we are not outright aggressive, looking, as another aunt said yesterday, for the person to come in and say, "I don't get it," we are passive aggressive.

The Porter girls -- my mom and her three sisters -- are constantly referred to by others as being the root of the sarcasm, the harsh jokes, the smiling (yet biting) criticism, the pouncing on the weak. Did it all come from the maternal side, though? It couldn't have. My father was as brutal and blunt and quick as any Porter woman. So my sister and I, and our three brothers, got a double dose, then. And so it is without surprise that my 5-year-old son says, dripping with sarcasm, "We're going to the drugstore before the park? How ex...cit...ing." Or that my 10-year-old son's acrostic of "Mother" starts with "marvelous housekeeper" for the "M."

I joke nowadays that any potential spouses of my children will have to be checked by us for good teeth genes. I have bad teeth and gums. Pete is British. [No offense intended.] So we need to make sure that the kids marry people with good teeth genes. And I'm thinking we might want to look into any traces of the snarky gene, too. Or maybe a sharp wit isn't the worst thing to inherit.

Email ThisBlogThis!Share to TwitterShare to FacebookShare to Pinterest
Labels: family

So how was the birthday party? By the way Bruce is out your way this week (don't get too excited, I'm talking about MY Bruce, not the other Bruce.) He's going on another job interview. I told him if he gets offered over $150k he should take it. Who cares if Jason needs therapy for the rest of his life? 4 schools in 4 years...what doesn't kill you makes you stronger, no? Any nice homes for sale in your neighborhood? Ah, never mind. It's too far of a commute.
We'll just wait 9 more years until the kids are out of HS then we'll come back...heck, we might as well retire!!

sorry, I can't help laughing at your inherited snarkyness. My seven year old has it on both sides as well... and my husband is British too. She was practically steeped in sarcasm. Poor thing.

so is the horse picture in reference to the biting nature of your family? or perhaps the english teeth? hehe

you're posts always make me giggle.

my husband's family is sort of the same way. the women are all LOUD and OBNOXIOUS; the men are talkers, but they are quiet thinkers. so who do the men marry? more loud and obnoxious women. i happen to be one of them.