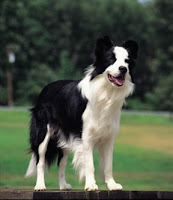 Ever since I've been taking the mutton-head (AKA cow witch, super ball hog, Corrie) down to the field to chase balls every morning and night, I've met many a folk out on similar missions. There's Ben, a standard poodle look-alike who is, in fact, a very expensive breed. There's Jack, a miniature Collie look-alike who is also, in fact, a very expensive breed. There are the two evil German Shepherds who, truth be told, are in fact imported from the Czech Republic. The fact that they're imported doesn't make them any more evil.
Perhaps their breed comes from the Cold War days and they were bred to hate Americans. Not unlike Vladimir Putin with his KGB training. Perhaps that mean streak, once bred into them, isn't easily removed. Not in dogs, at least, and I'm thinking not in Putin either.
Ah, again, I have digressed. The point of my story is about the dog I most frequently encounter: Ray, a border collie look-alike who is, in fact, a border collie. Ray is 18. His owner, Joe, has got to be about 80, if not a tad more. They both move kind of slow. Ray even more so than Joe. Joe loves to talk to me about Ray. He loves to talk to me about his five kids, his endless supply of grandkids, his grandkids' accomplishments, and so on.
Although I appear to be a rather caustic bitch, I am, out in public with real people, typically quite solicitous of others' feelings and needs. In this instance, Joe needs to talk about all these things, and I listen attentively. [Yes, it's a fake attentiveness, but I'm really good with feigning interest and murmuring the right responses.]
On Tuesday, I was finished with running that puppy o'mine ragged and put her in the car. I went back to get my two boys and the other dog, and I ran into Joe. Trailing behind Joe was a black and white border collie who was not Ray. It was Murphy, the dog of Joe's daughter.
I didn't really need to ask. Joe immediately told me the story of losing Ray on the 8th of July. How Ray hadn't really been himself Saturday the 7th. How Ray had just kind of napped all day. And how Ray hadn't come to Joe for a walk on Sunday the 8th. And how Ray had just slept all Sunday until it became clear to Joe that Ray wasn't really sleeping.
Good for Ray that he went peacefully. Good for Ray that he never had to put Joe in the position of having to put him down. Good that Ray had a long, happy life.
Joe wanted to cry. I could see it. He wanted to cry so badly. He missed his best friend. He was so sad. But just like we breed into dogs certain traits, we've bred into old, old men that they're not allowed to weep for their losses. They have to tough it out. And Joe, nine days after his best friend in the whole world died, has not forgotten that lesson.
I'll be damned if that lesson is learned by my sons and daughter.
at July 20, 2007

Email ThisBlogThis!Share to TwitterShare to FacebookShare to Pinterest
Labels: death

Well that just made me cry!

You're right I think there's an important lesson to be learnt there too. Thanks for popping by my site. It's great to "meet" you too!