Hello sports fans! We’re into Week 3, and we’ve got a doozy of an edition this week. Try to keep your bile down as best you can.

The rules? I will supply you with the names of two people. You have to choose which one you would jump. Do not let your sexual orientation get in the way of playing. Do not let the living status of the options get in your way. You must choose one of the two. Suicide is not an option. “Jump,” of course, is a polite way of saying “having your way with sexually.”
What was the score last week? Paris Hilton: 7. Scooter Libby: 4.
In my mind, the two in this week’s game truly show what bad sportsmanship is and how not to be a role model to the youth of America (and the world, my fabulous international readers).

Jump One is Barry “Bobble-head” Bonds. Does Mr. Bonds need any introduction? A former Pittsburgh Pirate, he’s been with the San Francisco Giants since 1992. He’s poised to pass Hank Aaron’s home run record very soon. Many a Giants fan rallies around him, joining him in blaming others for whatever tiny ills face him. They’re willing to ignore all the many indications that he’s cheated by using steroids, and that he’s lied about using them. What a joke he is.
Jump Two is new to many non-football fans. (That’s American football to you foreigners!) It’s none other than Michael Vick, quarterback for the Atlanta Falcons. Or is that still accurate as he’s been suspended by the NFL commissioner and ordered not to report to training camp? And what did Michael “Vicious” Vick do? The feds say he and some pals are involved in some truly nasty dog fighting. The charges are sickening.
All right, kids, let me add the caveat that these two “gentlemen” have not been found guilty of any crimes. And, remember, it’s the federal government that’s involved here, the makers of “Oh, Look Over There, It’s a WMD!” [And that, dear friends, is the best I can do to try to make them slightly less unsavory.]
Jump One? 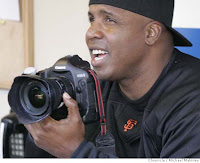 Oh, dear, I never would have believed that I’d jump Barry over anyone else. That man is a cheater. He is a liar. It is because of him that others – young kids in particular – feel the need to do steroids to compete in sports nowadays. Kids have died because of their use of steroids. Wives and children have been murdered due to ‘roid rage. And, yet, the hands-on horrors that Michael Vick has apparently enacted are frightening. If we fear what a little kid who harms bugs or animals will grow up to be, shouldn’t we fear what this grown man is capable of doing to dogs? Isn’t this kind of grotesque behavior possibly indicative of so much more? I’ll take the ‘roid user over the dog abuser this time.

How about you?
Wanna play? Vote for your jump in the comments or in your own blog and link to it in the comments.
[Photo of Barry Bonds by Michael Maloney/San Francisco Chronicle.]
[Photo of Michael Vick credit AP/NFL File.]
at July 23, 2007

It is no contest for me this week. I absolutely, 100%, positively would walk across hot coals barefoot for 100 yards, naked, before I'd even LOOK in Michael's direction. I cannot abide, and perhaps might not even be able to forgive... cruelty to animals. So I guess I'll take Barry this time. However, is it true that steroid use makes the user... uh... less... effective in the nether regions? So I probably wouldn't get very far in the "jump" anyway. Thank God. ;)

I agree 100% with Library Girl. There is NO way I would even think about jumping the cruel Vick. He repulses me.
Not that Barry doesn't repulse me, just on a different level. Definitely the lesser of 2 evils.

As much as it galls me, I'll jump Bonds. Vick is a horrible man. Bonds is a cheater. Like d said - the lesser of two evils.

And maybe library girl is right - the roids may affect his 'performance' in that area, so maybe I'd be spared the jump. ;-)

Have to agree with previous voters for the same reasons.

Same here. I thought dog fighting was American vernacular for something or other, but apparently it really is "White Fang" time - Yuk

So I'd go for the top one too but cheating - Yuk!

Can't we have something a bit more savoury next week? Please pretty please?