Welcome to the inaugural installment of the weekly game “Jump One, Jump Twosday.” Perhaps you’re familiar with the home edition of the game, which when I started playing was called “Jump One, Jump Two.” No materials required, beyond at least one human. Preferably more humans.

Enough of a lead-in. The rules are simple. I will supply you with the names of two people. You have to choose which one you would jump. Do not let your sexual orientation get in the way of playing. Do not let the living status of the options get in your way. You must choose one of the two. Suicide is not an option. 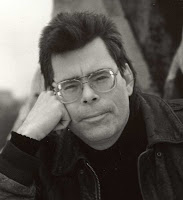 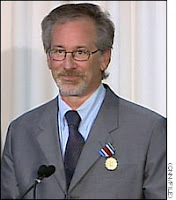 I choose 2, Steven Spielberg. Both are prolific in their respective fields. I was a huge fan of both when I was younger. I read every Stephen King book he wrote for a number of years. I saw every Steven Spielberg film.

Somewhere along the line, though, King’s books all became the same to me. And he was putting out so many that I thought the quality was diminishing. Add to that the fact that I no longer fill my brain or heart or soul with evil of a fictional nature, and there ends my fascination with King.

But Spielberg? Oh, the films he’s done. The joy he’s brought me. The tears he’s evoked in me. Bravo! And the fact is, let’s face it, he’s a better looker than King.

Oooh, I'll bite! I am torn, actually. King has begun writing the back page of Entertainment Weekly, and it is always SO good that I've become a fan of his where I wasn't before. His "Farewell to Harry" article this week is stellar. However, Spielberg's movies are the favorites from my youth... I mean... Indiana Jones alone sends his personal stock soaring... I'm gonna have to go with Spielberg!

Steven King is waaaaayyyy too odd for me. :)

I'm laughing so hard I can't write! What a fab game. I'll go for Spielberg only because he's got a beard though. The other guy is just not an option.

Which one has more money? ROFL
I guess Speilburg. My boys would disown me if I didn't pick him! LOL

I have to 'jump' on the Spielberg bandwagon myself. I loved King's earlier works, but he's just too creepy for me.

Spielberg for me. King is a nut case to me. No way baby. Okay, really I don't want either one of them. How about Tom Selleck?

I'm so going with Spielberg. He's better looking and way less creepy. Always a plus. I love this idea. I'll keep coming back for more.

I'll take Spielberg, too. Feelin' kinda bad for King, tho....won't somebody jump him??

This is a fun game! I'll be back for more, too!

I'm going for Steven King! Definitely! I completely adore Spielberg's movies and his vision and he is a national living treasure, but Steven King's mind is totally sexy and twisted -- I love that.
:)

Ick to both, but I guess I would choose Spielberg.

Ooops. Forgot to say why. They both have a lot of money. Yes, I'm shallow, but Spielberg is better looking and doesn't scare the hell out of me. I have read many King books too. His mind must be warped to come up with that stuff. I guess mine must be too, because I enjoyed him, Koontz, Saul, etc., when I was younger.