It's Fun to Kamp at the Same K-O-A 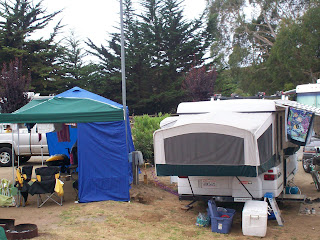 I can’t really call it camping anymore, not when we’ve got the nifty pop-up trailer and when we stay at a Kampgrounds of America (hereafter known as KOA). I couldn’t decide between calling our current adventure McCamping or Kamping. In the end, I went along with the tradition of KOA and am calling it kamping.

We’re in Santa Cruz, me and the kids, while Pete has his own vacation – a week without a whiny, clingy, complaining, tired, demanding, over stimulated person. Not to mention he doesn’t have to put up with the kids. [You did see that joke coming, right?] He gets to luxuriate in the stillness of the home, broken only by the never ending needs of the dogger.

There are banana bikes to rent. There’s a jumping pillow. There’s a mechanical bull and a mechanical surfboard. There’s a bonfire every night. There’s a pancake breakfast on Sundays in the same room they have bingo Saturday nights. There’s a miniature golf course, a volley ball court, and a baseball diamond. There’s a swimming pool and a hot tub. There’s a general store with anything you could need (except a nice French baguette to go with our pasta).

This is starting to sound too much like a PPP for KOA. Here’s my point: it’s just like a resort hotel, only more white trash like. And a lot more dirt. I said to Pete the other night before he went back home, “I never cared about dirt or sand as a kid. It never bothered me. Why do you think it bothers me not?” And he hit it dead on when he replied, “Now you have to clean it up.”

Back to sweeping my own little part of nature!
[I just took that photo. We're the pop-up on the right. The folks next to us have the wind screen.]
at August 06, 2007

Camping with wireless internet? That's my kind of place! LOL
Enjoy it, and I'm sure you get time without the kids too! They're busy running all over the campsite..LOL

Wish I could be there with you! We went to a KOA last summer here in Maryland, we rented a cabin with air conditioning. Now that was roughing it. We also had a pool etc., and bingo, and lots and lots of rain. All night. And it did not let up at 2AM when one of the kids woke up and had to go "number 3" like, RIGHT AWAY. I will spare you the details...maybe next summer!! Miss ya!

Camping with wireless internet - what will they think of next? Maybe housekeeping? hee hee

This looks like such a blast -- I want to go camping at KOA now too! I had no idea that this existed. I mean I've seen signs on highways for KOA, but I never knew what they were about or how cool they are. And Santa Cruz is so beautiful.
:)

That's my kind of camping! Now if only there was someone there to cook for you...