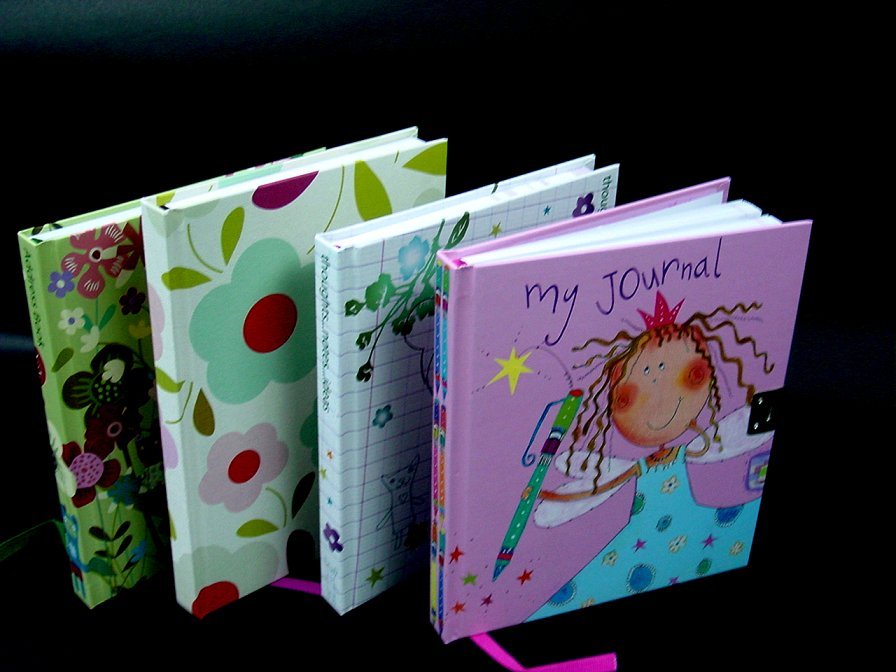 I know many writers who have written for as long as they can remember, and they have the journals and diaries going back to their early childhoods. I am not one of those writers. While I have always wanted to write, I have been distracted from writing many times, most recently by the three children who call me “Mom” or, when annoyed, “Moooooooooooooom!”

The only time I kept a diary with any notable consistency – aside from this blog – was when I was about 11 or 12 and my sister was about 14 or 15. From the moment I was born until I was 13, my sister and I shared a room. It is not easy being the younger sister when the older one is much smarter, much prettier and much older. [I realize a bit less than 3.5 years isn’t much of a gap when you’re in your 20s and beyond, but until you hit about 20 or so, it’s a large difference.]

As a rule of thumb, we did not get along. While there were moments of joined camaraderie against the common foes of our parents or our three brothers, those moments were rare. We had nothing in common, and any attempts by my parents to make me do something she did – softball and theatre, come to mind – just irked me to no end. Interestingly, I became quite a good ball player and essentially ran the theatre my junior and senior years of high school.

But back to the diary. We were still sharing a room. I was in 7th grade and my sister Ginny was a junior in high school. I wrote secretively in the diary. I never had it out when she was around. I hid it so it would never be found. I wrote what I was feeling, including, at times, how mean she was to me and how much I hated her. I thought it was safe from her prying eyes.

One night, I happened into the room and she was feverishly writing in something. She made no attempt to hide it from me. It was a diary. She had started one of her own. “Who cares?” I thought. “I don’t care what she writes about.”

My thoughts, of course, were lies. I desperately wanted to know what she was writing. I couldn’t wait to pry into her stuff once she’d gone away somewhere and I could be assured I wouldn’t be caught.

The opportunity came up the next day. As I said, she’d made no attempt to hide it. I took the bait. And it was bait, certainly.

I was very angry. I was not as smart as her, certainly, but I was bright enough to realize it was a load of crap. I never indicated that I had read her diary. We continued along in the roles we’d always assumed. I continued to hate her while secretly admiring her and being jealous of everything she had that I felt I didn’t.

I never wrote in my diary again.

[Thanks to Sunday Scribblings for allowing me to yet against transport back in time with their prompt. Find out what others are scribbling here.]

As a younger sibling who shared a room with an older brother, I thoroughly enjoyed your post. As boys, we didn't diaries, but I did mettle in his baseball card and tape collections.

The day I got my own room was the highlight of my childhood, and probably his too!

I am very grateful to have never had a sister. ;) My girl's can't stand each other!

i was the older sister,, and my little sister always got the best of me,, i guess we have always been a bit of a backwards family....

Oh gawd... the adventure of siblings. You post was familiar, and enjoyable to read.

oh dear
i remember writing an entry in my dairy adn leaving it out so my boyfriend at the time could read that i LOVED HIM SOOOOOOO MUCH
he never did pick it up !!
great story

I had a diary for all of five seconds, in which I blathered about how I wanted to be a model and why couldn't I be discovered as a famous actress, why? It was pretty embarassing

Being a only girl amongst three boys, I got my own space and I cherish my moments with my brothers. They never read anything I wrote. My diary was, I suppose not interesting enough for them..:d

Oh the joys of sibling rivalry! Does your sister read your blog?

Ah, that love/hate relationship between sisters...my older sister is also 3-1/2 years older than me. We didn't get along at all until I finally turned around 16 years old...we never had to share a room though, thankfully!

I wasn't much for keeping a journal either. Tried, did it a bit, then moved on. I enjoyed reading your post--I can't imagine having to share a room, my brother and I fought like cats and dogs as teens so thank goodness we could "go to our corners." ;-)