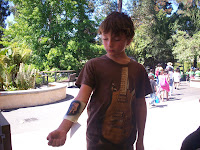 1. What is your definition of self-assurance? Mine is cutting in line at the food line at Target, being called on it and saying, “No, you’re wrong. I was here first.” Wow. She so wasn’t! And I told the woman who was in front of me – the one who pointed out the bitch’s transgression – exactly that. And we both rolled our eyes in unison. [Is there an IM shorthand for rolling eyes in unison?]

3. The woman with the curling iron, hair spray, and fully loaded make-up bag in the KOA bathroom at 7:45 a.m. doesn’t need to say out loud, “I hate camping.”

4. And I really shouldn’t have pointed out that I’ve been here a week. But the look of shock on her face? Priceless.

5. Our newest neighbors pulled in the other day in a rental RV. The gent said they were from Florida and had just been in Las Vegas, where it was 105 degrees. They weren’t prepared for the weather, he said. All night long, a motor ran on their RV. We figured they were running the heater. Nope. Turns out it was air conditioning.

6. The riddle answer: A Floridian. The riddle: What type of person runs an air conditioner all night long when it’s 55 degrees?

7. Enjoying a delicious Chinese dish, I say, “I’d trade one of my kids for that.” Youngest asks, “Which kid?”

8. I’ve mentioned the obsession the youngest lad has with death. Specifically, he is obsessed with the deaths of others because he knows, as the youngest, he’s likely to outlive us all. In the middle of the parent meeting for the eldest’s soccer team, the youngest asks, “Mom, when you die, can I go to your funeral?” Over the laughter of everyone I say, “Of course, and I hope you’ll speak at it.”

9. Once again, youngest is banging away, drumming on the white truck, the new truck, the one we’re not even allowed to exhale into, much less drum on. I tell him to knock it off. His response, “I’m not drumming. I’m chopping.”