"Will I Ever See My Mom Again?" 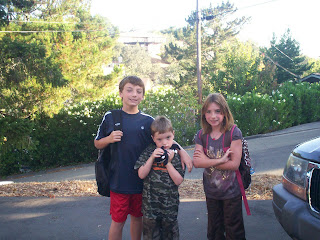 That's the question posed by the youngest as he had the only visible meltdown as he was being shipped off to kindergarten late this morning. He's an afternoon kindergartner, which means he crossed paths with all of the morning kindergartners, all of the morning kindergartners' parents, all of the other afternoon kindergartners, and all of the afternoon kindergartners' parents.
All told, spiky-haired camouflage boy -- all smiles in the picture this morning before the older two were dropped off -- sobbed, screamed and hiccuped his way to his first day of kindergarten before 100 slightly bemused people, one brave soldier of a dad, and one internally aching but outwardly encouraging mom. I'm telling you, you'd have thought that kid was a first born rather than a third born. [Go ahead and take offense by that, if you're so inclined. Although it's not intended to offend anyone. Or maybe it is.]
Anyway, the principal just called to assure me that he has settled down. No, he didn't puke, as his is modus operandi. She was sure he was fine because she checked on him twice. That was mighty nice of her. Why, she's treating me like the parent of a first born! [Ditto above disclaimer.]
The lad was all excited. Rarin' to go, he was. Up until the exact moment Pete relinquished his hand and he went to his teacher. Then the hysterics started. Within a moment, the school authorities were gesturing us to get completely out of his sight. It was then I realized I'd never mentioned his stress puking. Thank God he kept it together that much! It's bad enough he'll be known among his peers as "Cryin' Boy." Can you imagine if he was known as "Projectile Vomitoid"?
Here's hoping he makes it through the next two hours and 25 minutes.
at August 23, 2007

Oh my goodness! When my 4th born went to Kindergarten, her dad cried. And she didn't want to leave us. Her stomach was all knotted up. Well, he is your 3rd born and you know that those kids will forget all about it. I hope he has a better second day!

We know he'll make it..they always do but doesn't it just break your heart to know he's not happy for even a moment because he WANTS you? Of course, he's probably playing with everything that Kindergarten has to offer and will now cry because he has to go home. *sigh*

I'm sorry to hear he didn't like the school on the first day. I hope it'll get easier as the day goes. You know he'll soon makes many friends that he wouldn't like it if you pick him up too early that he doesn't have enough time to play with his friends.

I'm sure it was sad for you, and i'm sorry for that, but there is something sweet in a little boy feeling sad on the first day of school. and, what a damn nice principal.