First, as always, the rules: choose one; you can’t have both; you can’t have neither; you can base it on whatever base reasons you’d like to; hari-kari is not an option.

When two beautiful people get together, what do you get? A Jump One, Jump Twosday set like today.

Jump One is David Beckham, soccer player extraordinaire. Former Manchester United star, former Real Madrid star, current L.A. Galaxy star. I know some native-born Americans have followed soccer religiously, but most couldn’t have named one of the MLS teams to save their lives. Now, we’re inundated with jerseys sporting the midfielder’s name and number. How much is the dude being paid to sell his soul and quit playing real football for the almighty dollar and the amateurish play of the Americans? A base annual salary of $5.5 million. Not too shabby, mate. Especially when you add in all of the endorsement cash.

Jump Two is Beckham’s lovely wife, the former Posh Spice, Victoria Beckham. Outside the England football world, she was the more recognizable and worshipped of the two when they first got together. She’s moved beyond the pop music scene and is now into fashion and style. I love the line in wikipedia saying she “styled Tom Cruise and Katie Holmes” for the Academy Awards this year. Crack me up! She’s beautiful. She’s a mother of three with the body of a waif. What’s not to love?

So who’s it going to be? Jump One or Jump Two? 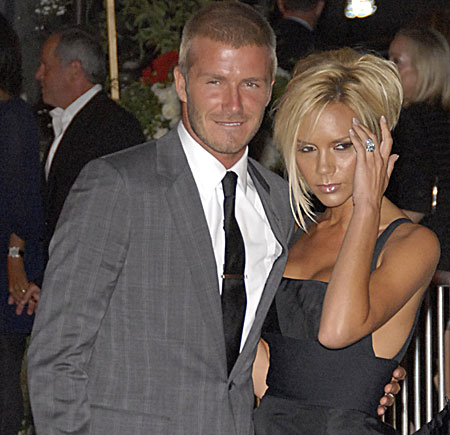 I’m sticking with my hetero leanings this time, and jumping the delicious David. He’s gorgeous. He’s got a hell of a body. And he’s a talent. A real, live talent. Less of that airbrushed styling for me, thanks. (Yes, I’m sure he’s styled by her, too. But on the field? I can dream that it ain’t so.)

Is this even a question? Mr. Mc Hottie. For sure.

Now how can I play this game. Every week I make a mental note to play and then forget (that's what happens when you only have 2 working brain cells).

Them's some darned good looking bones! Eye candy for sure and Mr. Beckham -were he ever available (and a lot older too -lol) could eat crackers in my cot any time he wanted! MMMMMM good!

It's the Mr. for sure. She is completely scary. Why does she always look like she's been shellac-ed?

Becks all the way. Though my constant refrain would be: No. No, David. No words. Our passion needs no words. We shall speak the universal language of jumping. In. Silence.

The man has the voice of a leprechaun on helium.

I am frightened of Posh. How can someone live with no body fat or pores? It is unnatural.

I have to go for Mr. Beckham. This week's choice was easy and refreshing.

I agree with alpha dogma, no talking allowed. Having to listen to his voice would almost be a deal breaker. Like nails on a chalkboard.

Yep, Alpha Dogma has my answer. This was an easy one! :)

I'm going with the Mr. as well. She scares me. Freakishly skinny and she always looks bitchy. Scary...

until i saw her on the tv special when she first moved to the US - i probably would have said HER - cos i'd heard she was funny and smart and you have to admit gorgeous - but when i saw her on that - i wanted to SLAP HER. So i figure i'll go with David - but as has already been said - he needs to keep his mouth taped shut !!!

Becks, of course. I think we should allow ourselves to girl-crush sometimes, but I've always preferred Sporty Spice. She had a better voice too. :D

I wonder if she can bend it like Beckham, too? I'll pass on both thank you - just not into the beautiful people I guess! Can we go back to the rock stars???

CLEARLY, the only answer is David. Even if you're a dude, the answer should be David. Because Posh is not attractive.

David, I actually don't think Posh is all that pretty. Sylish and thin, but not pretty.