I am a Bruce Springsteen fanatic. The half-dozen regular readers know that. Now you other three reading this know it as well. I won't waste time detailing my obsession, except to say that it doesn't go so far as me having any restraining orders issued against me. [The courts were more liberal in Jersey in the 80s.]
Since I do adore the man, I have a sense of Springsteen morality. For me, it comes with the territory. On many occassions throughout the years, I have had extra tickets to his concerts. I have never scalped them. I have only ever sold them at ticket price. Because, really, I shouldn't be making money off him.
Another example of that morality? Bootleg copies of his concerts and recordings have been available for years. Long ago, they were in record or tape form. [Gasp! I am that old.] I confess to having heard one or two that my friends had purchased or made. I never bought them. I never even accepted a free copy. Nowadays, it wouldn't occur to me to download them. Because he really deserves the money for his work. It's his work.
Want another example? Lots of inexpensive unauthorized shirts can be had. Some of them look pretty good, too. Nope, never bought 'em. Paid the high price inside the stadium or at brucespringsteen.net. Because it's his image, and he should get the money for its use.
Never took a photo of him in concert and then shared it with many. When I saw him a couple of months ago, you would not believe the number of people taking photos. Not me.*
But it's got to stop somewhere, doesn't it? Apparently not. A few nights ago, I had a dream about him. [For the record, while I'm sure I dream quite frequently, I rarely remember a dream. Maybe once a month or so. That's "rarely," right?]
In the dream, we were together in Europe. Yes, we were together. We slept in the same room. We slept in the same bed. I can even picture what I was wearing to bed. We spent three days together. And we did nothing but talk. Because he's married with children. [Yeah, yeah, me, too, but I get a free pass from my husband if I'm ever offered the opportunity to sleep with Bruce.]
It's a dream, for God's sake. Can I at least suspend my Springsteen morality to enjoy myself, um, more fully than I did in a dream? Apparently, I cannot.
When I woke up, I was amazingly disappointed in my stupid mind. So, in anticipation of dreaming about him in the future, I am going to consciously go against everything I've stood for in the past about him. I figure if I do it now, I'll get the chance to actually "do" him if the chance arrives in a future dream. 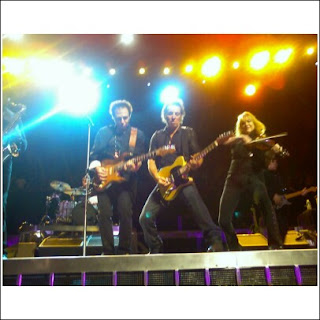 *My husband, standing in the second row center behind his wife (me!) who was front row center, snapped this shot with his cell phone.
at December 17, 2007

Email ThisBlogThis!Share to TwitterShare to FacebookShare to Pinterest
Labels: me, silly

I jest, of course. In a dream, ANYTHING is game.

For the record, EVERY single time I hear a Bruce song (or see a Sopranos starring his sidekick) - you immediately pop into my head.

That morality must be deeply embedded in your subconscious. It's going to take a bit to overcome that.

I must be one of those other three you mentioned. I really enjoyed your post.

Welcome to the dark side! The first step is always the hardest, but it will get easier. I promise (insert evil laugh).

I know about the dream morality thing. I have had a few what-could-have-been amazing sex dreams only to spend the majority of the dream saying, "No! I'm married! We can't do this!" Grrrr.

Though, maybe as a reward for all my "good behaviour" in my other dreams--I had a PHENOMENAL sex dream with Brad Pitt. The term "mind-blowing" comes to mind. So, maybe after having all your "good girl" dreams, you will finally be rewarded with a naughty one. I would say that is worth a lump of coal for Xmas. ;)

I agree with worksformom, you are forever connected with Bruce Springsteen in my mind.

I do hope that future dream happens and it's all you want it to be! ;)

Hey! I've found a kindred Bruce spirit for you!!!

Thanks for bending your rules to share that picture! Hope that clears the decks for your next dream :-). I've about concluded that I'm never going to see Bruce live in this lifetime, so I need to experience it vicariously through you.

I dreamt that my husband sold me in an auction (a la Mayor of Casterbridge) to Bono of U2. I was so happy, though not because of the sex thing. I was delighted because, as I had just been bought by a zillionare, I would have more than a few bob to spend on wool. That's my fantasy obviously... God help me

I too saw a Bruce CD and thought of you!

Wow, Patty, I am impressed with your restraint. Even in your dreams you won't sleep with a married man?? Heck, I sleep with former boyfriends ALL the time.

I don't recall ever having a dream about a celebrity type person but I have had some really whiz bangers about various people I actually knew/know in real life -some whose wives probably wouldn't appreciate the fact that my subconscious was apparently extending over into their turf. Oh well -nothing ventured, nothing gained even if it is in a dream or vicariously.

I've never had a dream about Bruce, dirty or otherwise. I have had some seriously steamy ones about John Cusack, however. My other boyfriend.


Thanks for stopping by. It's always good to meet another die hard fan.

Like worksformom, I think of you every time I hear Springsteen. :)

Oh, and my hubby is the bootleg master. I'm guessing he has some Springsteen in his stash if you ever decide you want a copy.

I am saddened to hear of your G-rated dream.

BRUUUUUCE! For some odd reason, most of my celebrity dreams are G-rated, too. Lame!