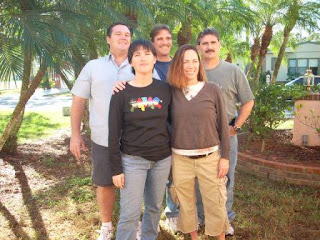 We fought a lot as kids. I say now, when I watch my own kids bicker incessantly, that I don't know what the attraction was then, but it was there in my childhood. We always wanted to be the winner. We always wanted the others to be the losers. There could never be a middle ground.
If we weren't playing a game -- Scrabble, monopoly, poker, hearts, etc. -- we were playing the family game. I would bug him, so he would be annoyed. He would pick on me to drive me batty. We would sometimes form alliances to give another one the business. The alliances, of course, would shift on a moment's notice.
There were five of us, and most of us were imbued with the drive to win at all costs. Easy enough to understand wanting to win the game, wanting to win the highest grades, or wanting to win the highest SATs. But what possible prize were we trying to win in other things? And what are my kids trying to win now, when they bicker over the remote, over the drumming, or over the baby doll sitting in the car?
It's taken me this many years to figure it out. We were fighting for parental love. We wanted to be our mom's and dad's favorite. And now my kids want to be in the number one spot for my love or Pete's love. It doesn't matter that you tell them it doesn't work that way or that you love everyone equally or that there is no favorite. They don't believe you. I didn't believe my parents way back when.
We're all grown now, the five children. We were together for the first time in 15 years earlier this week. We've stopped competing for the grand prize, but we'll still fight to the death for the Scrabble crown or the Quiddler crown.
I know why I've quit fighting for it. I know my mom loves me best. I'm thinking the others know that, too. [I'm kidding, aren't I?]
[Sunday Scribblings is a competition mish-mash this week. Check it out.]
at December 09, 2007

I had to smile at this post, Patty, remembering the many squabbles with my own two sisters, and watching my kids do the same. Their favorite time to start up was when I was on the telephone... you're right, 'cuz neither of them was getting mom's attention then!

Thanks for the epiphony. Does this also apply for when one ignores the other? SIghting the annoyance factor...or "He chats so I'm not playing" etc. Seems to be the preferable interaction between my two...the older one ignoring the younger one. I wonder what's better/worse. At least it's quiet.
LK

Funny, just yesterday I asked my oldest two why they were fighting so much over every little thing. And then I remembered how much petty bickering my brother and I did growing up.

Your assessment is probably spot on!

Sibling rivalry prepares one for the world... where people are far less likely to care about you.

Hahahahha. Love the end of that! I imagine one of my kids writing that some day, too.

I'm sitting out this week. Need a weekend break.

ehehe that was funny!
A brotherly war that was! I'd go nuts with 4 siblings. But it must be wonderful, at the same time.

I'm glad you could be together with them this week.

so glad you enjoyed your visit. isn't it just in us to win??? my guys do it too, and i know my sisters and i were the same way. my husband, on the other hand doesn't get it because he was the only one. kind of sad for him, but he doesn't know it any other way. thanks for your comments today on my blog. when i get your email comments, i can't reply???? have a good one!

haha cute post! We should all feel like our parents favorite! I think it must be and must have been so much fun to be one of 5! :)

HA! I bet she does... I know my Mom always favored my brother.. but it never minded -- he is pretty cool. I did my first today!! Susiej

Hey, Patty, my mom loves ME best, too. I loved this post, as always.

what insightful food for thought!! We have five children and never thought about that but I think you are right!

Great post. I think my mom loves me best, too. wink, wink!

Well OF COURSE, your Mom loves you best. How could she NOT! You're also the best looking one too.

When my kids were growing up and they would get into squabbles, there were many times when the fights were really stupid and petty and I couldn't comprehend why they treated each other they way they often did. I was an only child and would have given my right eye tooth then (still feel this way, as a matter of fact) if I'd had even just one sibling! My next door neighbors had 13 children and the family next to them had five children so as a kid, I virtually LIVED at their houses - loved all the commotion ya know. There were times I worried my kids were going to pull away from each other, not be there to hold the others up when needed and such, but now I watch them -still fighting at times -and see how close they really are. And my oldest is my favorite because she is the first-born; my son is my "favorite son" because he is the only boy and my youngest is my favorite because, well she's my favorite baby ya know. And they all know that's the way it shakes out too.

What a great post! My brothers and I have never been overly close but competition was our way to bond. Because where would we be without bloodsport croquet. :-)

Yeah, I wish my sis could read your post and understand sib rivalry for what it is. She STILL plays the victim. I guess, for her, playing the "poor me" card is better than dealing with reality and the choices she makes.

Actually I know for a fact that my mom prefers my sister. Sigh.