A Laser Lighting My Sneakiness 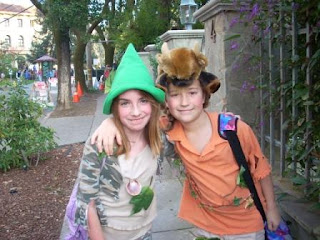 Daughter was a “lead” Lost Boy for the first and last shows. That means she was onstage a lot those two shows and had a dozen speaking lines. The other shows, she was a background Lost Boy, out for the big song numbers.

She truly did well and enjoyed herself immensely, thanks for asking.

Her BFF Z.’s extended family came to the last show. Z. and her sister H. were Indian/Lost Boy and Animal/Lost Boy, respectively. Their 13-year-old cousin, a boy, was there to see the show. Her family and I were hanging out in the lobby before the show. The cousin showed me his laser, proud that he’d had the foresight to replace the batteries. He shone it on the lobby wall.

He did it, and all hell broke loose among his family, appalled that he had the gall to bring a laser and to potentially blind J. [That was my fault. I should have told him to shine it on her chest. I neglected to factor in the bad aim of an adolescent boy and his toy. Sorry, J.] He grumbled, but he turned over the laser.

He said it was all my fault. I murmured that I was sorry.

I wasn’t, of course. You see, I had suggested he use the laser on them because I knew what would happen. Specifically, I’d have one less kid with a laser to worry about.