A Pound of Flesh: Wordy Wednesday #2 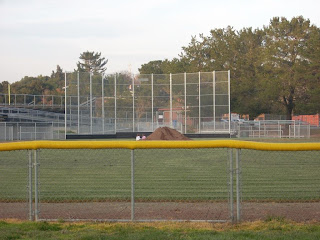 Actually, it's a mound of dirt. The baseball field down at the high school is adjacent to the field where the dog runs wild. Last week, just before the storms came to show just how much we're not in charge, I took her down there. I also marched my two youngest and their two friends down to "get the stink off." [A former friend used to use that term when describing why we should go out in a blizzard after being housebound.]

Anyway, I thought I was gaining four people to help me run the dog's butt ragged. Instead, they eyed that mound of dirt that will ultimately be fashioned into a pitcher's mound. They scampered over the fence, ignoring all signs stating "field closed," and made their way to the hill of dirt. And that is where they amused themselves for 20 minutes, while I furtively watched for "the man" to come screaming at them.

"The man" was obviously otherwise engaged. By the time I had the dog near collapsed from exertion, the kids finally headed back my way. Yes, they were muddy. Yes, they were rather sweaty. Yes, they were kind of stinky. Mostly, though, they were triumphant. And that won't wash away in the laundry or the bathtub.
at January 09, 2008