A Typical Day with an Atypical Boy 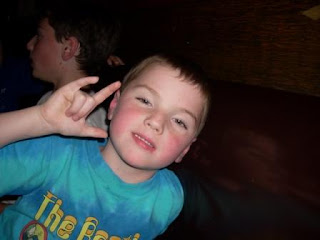 Youngest isn't really atypical, unless you compare him to his siblings. "Good" parents know better than to do that, at least within earshot of the kids. Here, though, out of earshot -- and eye shot -- of them, I can mention it.

He's a handful. He's been a handful since the day he was born. The only time he was like the other two was in utero. All three were easy pregnancies. [Yeah, yeah, go ahead and curse me.] I didn't have any major complaints with any of them. That's not entirely true, I suppose, because I did moan a lot with the first one. Oh, the leg cramps. Oh, the discomfort. Oh, the back pain. Once I actually went through childbirth and having a newborn, the minor complaints during pregnancy seemed, I don't know, silly.

Onto Youngest. He is unable to amuse himself for any double-digit minute length of time. If he can reach the eight-minute mark on his own, it's a cause for celebration. He is constantly in need of someone else to provide him entertainment. Or a snack. Or help with the toilet. Or milk. Or make that chocolate milk. Or, no, white milk is fine. Or a straw, but not a blue one. [The dislike of blue straws? No idea where that comes from.] "But who's going to play with me?" is his constant lament when I finally take pity on Daughter and let her play by herself.

So, yeah, it's a struggle. It's a daily, hourly, minute-by-minute struggle. But only when the other kids or Pete are around. When it is just him and me, as it is every school morning, there's no fussing. Well, he still needs help with milk or snacks, but he is only 5, after all. We drop the kids off, come home, and the three hours each morning zoom by. There are books to be read and a dog to be walked and homework to be done and Yahtzee games to be played and errands to be run. There is also time to myself as he busies himself playing school with his animals or watching TV or teasing the dog.

At night, when I lay next to him as he goes to sleep, we talk about the day. I encourage him to awaken the next morning with a new attitude of self-reliance and leave his freakin' siblings alone. He says he will. I remind him of the fun we had that day. He concurs that it was fun.

When he awakens the next morning, he pounces on Daughter and Eldest once again, and the struggle starts until they've been dropped off at school. Then there's the brief interlude of serenity, followed by 2.75 hours all to myself when all three are in school. At 3 p.m., it all ends and the house is chaos.

Parents with older children or grown children always say it goes so fast and enjoy the time when they're young. I try to use that as a mantra when Youngest is being...Youngest.
at January 25, 2008