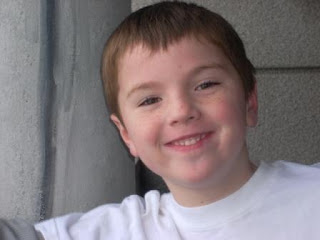 I've written volumes on Youngest and how difficult it is to be raising him. Okay, I've written about how difficult he is. [I just thought I'd try to sound a bit more like a, I don't know, good parent.] I could write a lot more about that aspect of him. I likely will.
But not today. Today I'm going to sing the lad's praises. He has risen to the occasion masterfully. He understands that Pete has had major surgery. He understands that he needs to tread softly around Pete. He understands that I'm busy helping Pete, so I'm not able to cater to the base needs of a five-year-old boy.
He's gone to sleep on his own, every night, since Pete arrived home from the hospital. He does not argue or whinge or beg. I tuck him in, and he stays put.
Always one for melodrama, he has accepted my inability to do centers in his classroom last Tuesday and yesterday. Last Tuesday, it was because I was with Pete. Yesterday, it was because I've officially joined the living dead.
In short, my little guy has shouldered on without too much in the way of demands. Do I see a new trend in his behavior? Do I envision this is now the rule rather than the exception? Sure, and I see unicorns with butterflies wafting from their cute uni-behinds.
It doesn't really matter much if he regresses back a bit when we have weathered through this. What matters is that, when our need was greatest, he gave us everything.
at March 12, 2008