Daughter is 9.75 years old and is in fourth grade. There is no one else in my life -- so far, as Homer Simpson would say -- who is as fearless as she is. She has been this way for a very long time. Her willingness to raise her hand to ask a question is amazing. Her desire to share an anecdote, whether related to the conversation thread or not, knows no bounds. She does not let fear of disapproval or disappointment, whether real or imagined, get in her way.
Joining a kids' theatre group last year, one of hundreds of kids, she made it known early and frequently that she wanted a speaking part. She didn't just want to be one of the Lost Boys in Peter Pan. She wanted to be one of the lead ones. 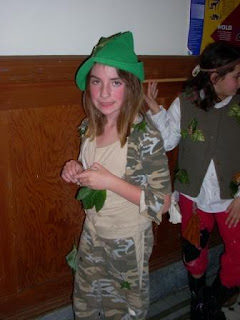 While some of the other kids in her dance class hung back shyly when it came time to choreograph who would be front and center, she nominated herself to be there. 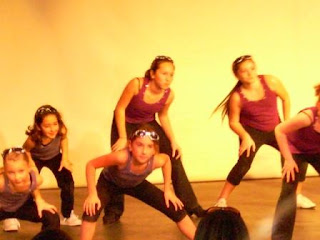 When the talent show at school rolled around, she signed up to do a dance on her own, alone on stage with just herself and her dance moves. While other kids needed the crutch of another, she shunned such a thought.

She will approach any other girl and ask her to play with her. She never considers that someone will turn such a request down. That thought just doesn't enter her mind.
She ran for Student Council secretary. She spoke in front of hundreds of kids without a care in the world. She lost, but won't let that keep her down.
She was the one of 30 kids in her class who wanted to present her county report first. She wanted no assistance from me in the preparation department. She rarely asks me to check her homework. She will do it on her own, pass or fail, win or lose.
This, dear Daughter, is a fib for you. [Don't know that new form of poetry called a "fib"? Click here.]
How
she
got this
inner strength
I’ll never know, but
it lies inextinguishable.
[Sunday Scribblers are fearless this week. Check them out.]
at April 12, 2008

Oddly enough she even looks a bit like my granddaughter Anna did at her age. Anna is and was fearless in all those fields. She is now a student at Adelphi in New York (admission by audition) majoring in drama and voice, with a minor in dance. She's also the one that can be found walking on ridge poles and fences, even slack chains.

I can learn a lot from girls like this.

Fearless with a capital F. Your girl will get far, and I hope she reads this beautiful post of yours.

Love you post, I'm sure your daughter will be moved. My little girl is only three and is as fearless as they come - I think they all are at that age. Children should be an inspiration to us all.

I think the origin of her wonderful confidence is likely having someone in her life that believes in her, loves her, and is so proud of her in everything she does - the ideal growth environment!... NOW do you have any idea where she got it?

You are blessed to have such a daughter. Thanks for posting this.

What self confidence! She will go far in life. ;)

Long may she continue to be so!

And I wonder where she gets that fearlessness from Patois? :)

Oh that's fantastic!
Having self-confidence is so important while growing up and then for the rest of our lives. You must have done something right though ;) Don't pretend you don't know!

how can you get her to write a book on her obvious wisdom about confidence and compassion? what a precious treasure!

She is awesome and I strive to be her when I get older. :)

Daughter is a fine person! Darling and daring! You two must share fun by the ton! Good for you....