Sickness Has its Rewards

Youngest is sick. While I always love him, I never like him more than when he is under the weather. His incessant drumming on all things ceases. His constant annoying of his sister stops. His clamoring for attention ends. His non-stop neediness evaporates.
He wants to be held and stroked and quietly read to. He wants to sleep for hours on end. He wants to bathe...twice in one day. [Our previous record was twice in one week.] He wants to talk softly.
Do I wish illness would befall him more frequently than the current twice a year? No, but, oh, how I savor the illness when it comes to us. And I'm even kind of glad that he is a non-believer in medicine as that just makes the mellowness last a tad bit longer.
Here's two pictures of him. The first shows the new gap which exists in his lower teeth. Yes, he lost his first two teeth, just days apart. The second shows him taking a lovely, long nap yesterday. I'm not sure if you can tell, but his eyes are slightly open. Kind of freaky, eh? Still, quiet reigned in the house. 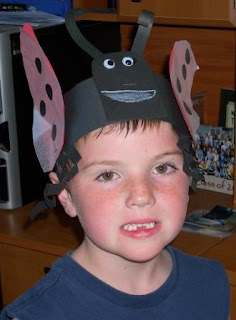 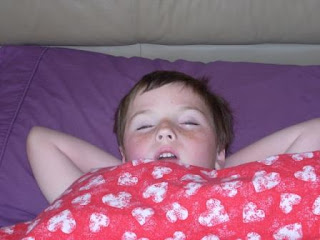