A couple of weeks ago, Daughter and I did the theatre. We did it all the way: dining out at a hopping joint (albeit on this side of the bridge), driving through the grungiest part of the city to reach the Orpheum, paying an outrageous sum to park, offering up our outrageously expensive tickets to gain entrance, and then sitting with many other teens, tweens and younger girls to experience HIGH SCHOOL MUSICAL. [Caps added to underscore her enthusiasm, not mine.]
Yeah, yeah, yeah. It's High School Musical, a Broadway-type production as only Disney can do it. She loved it, as only that girl can love something. Her laughter repeatedly rose above all others 'cause that's what she does. She and the other four girls we went with had a blast. I believe the other three mothers had nearly as much fun as the girls did. Me? I got to look at the intricacy of the stately Orpheum Theatre, grateful for something to turn my attention to rather than become part of the HSM cult.
[Yeah, yeah, yeah, I suck as a mother of a tweenie girl. I am so not a girl. I was never a girl. Yet I play one every day on the stage that is my life.]
The people seated next to us -- a woman, her husband and their two children under the age of 8 -- had flown in from Montana to see the show. "Because you don't get anything like this where we live." [Dude, thank God for that!]
Seriously, I kept all these thoughts (mostly) to myself and my handy, dandy notebook. I was enthusiastic. I was joyful. I was thrilled. [For the record, having had an awesome hot fudge sundae at Max's for dessert prior to the show, I was thrilled with one part of the outing. And I enjoyed chatting with the other moms at dinner, as we let the girls have one end of the table all to themselves.]
It ain't enough, though, to just go see HSM on stage. You also have to buy the stuffed made-in-China mascot. And you have to stand outside the stage door and wait for the performers to come out and autograph your playbill. The girls were particularly thrilled with seeing the lad who played Ryan Evans. [You all don't really need a description of who these people are, do you? I mean, if you do, check out the imdb site, 'k?] He was good, I'll grant you that. But the girls' love of him made me wonder at exactly what age do girls notice boys' over-the-top sexual orientation?
Finally, then, some photos of the girls with the men portraying Ryan Evans and "dreamy" Troy Bolton, as well as a photo in front of the theatre poster. How's that for a heck of an intro to a Wordy Wednesday? 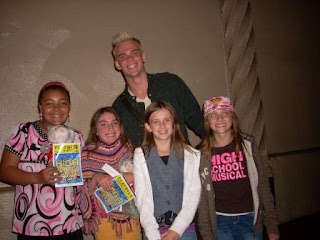 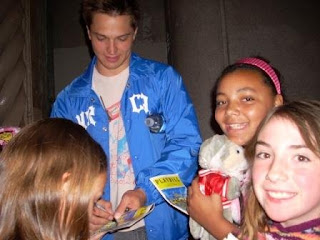 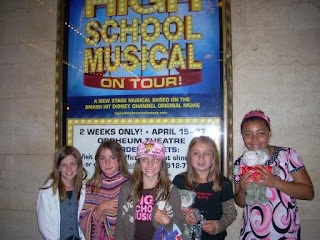