Wordy Wednesday #22: I Write the Songs

Youngest is musically inclined. He has a hell of a rhythm. He clearly hears music all the time. He tries to beat it out of his head by drumming on anything and everything. His music teacher made all the other kindergartners follow his lead during the music performance because of his ear. Afterwards, she told him she would love to teach him to play the piano because he has that certain something.
It's a good job he has that certain something because he certainly has lots of other "somethings" to drive us all crazy. [I shall save my rants about him for another time, however.]
This is a song he wrote last week. Notice he's written notes at the top, and, as he sang the song, he pointed to the notes he was using. I cannot read music. I should not be allowed to sing, but I do anyway. Saying I'm impressed by him, then, likely isn't saying too much because, really, what do I know? But impressed I am. [Oh, and the "M" and "D" stand for "Mom" and "Dad," in case you didn't figure that out. For once, he limited himself to one piece of paper.] 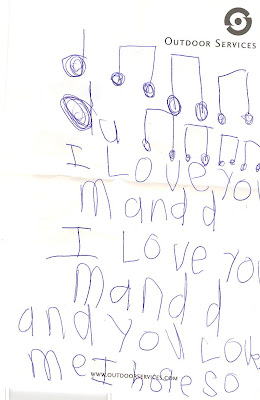