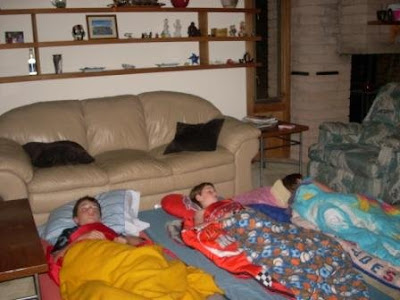 Okay, guys, don't tell Pete. This is between you and me.
We have rules in this house. I am the enforcer extraordinaire. Pete is the soft touch extraordinaire, with one exception: where the kids sleep. During the school week, he demands that they all sleep in their own beds. On the weekends, he'll let them sleep in the pop-up camper or in the playroom or, maybe, just maybe, in the living room.
During the summer, the kids and I slept in the camper probably four or five nights each week. Because it's summer, right, and there was no school to go to. Remember, also, that we were in Europe for five weeks, sleeping God-only-knows where at any given time.
So things were mighty lax in Sleepland.
But now that school is back in full swing, Pete's rules are also being enforced in full. Except he's out of town this week. And he'll be out of town most weeknights for the foreseeable future. (No, he's not serving any felony conviction, thanks for asking.)
So Camp Living Room has been set up, and the three little darlings are sleeping together, looking and acting as if they like to hang out with each other and as if they do love each other and as if they can't get enough of each other's company and as if they are little angels.
Why do they like to sleep like this? Because they all like the sound of other people breathing and sleeping next to them. It lulls them to sleep and it lulls them back to sleep if they waken during the night.
Hmmmm. I think that's why I like to have Pete sleeping beside me.

[A word in my defense re: photography ability. The photo was taken at 10 o'clock in the evening, in a dark room, with three sleeping kids as the subject. How good should it be, I ask you? Let's face it, I suck at photography in ideal conditions. What could you expect under those?]