Coming home from school on an unbearably hot day, we hang out in the park for a little while, the kids playing with friends and me fake-connecting with other moms. [Yeah, I talk the talk, but I'm not really one of them. I'm a poser. A damn good one, mind you, but a poser just the same.]
It doesn't take long for Youngest to start playing in the water feature of the park. In fact, it doesn't take long for him and his bud -- a bud who happens to be a girl -- to get dripping wet. I think to myself, "Damn good thing there aren't any active train tracks around here 'cause the two of them would be playing on them." [I'll translate: if I had paid just the slightest bit of attention to them, they probably would have remained dry. That's not true, though, as I kind of don't care if they get wet. I've done the same myself.]
The next day, Youngest asks me to please bring his bathing suit and towel so he can play in the water and not get nasty looks or hear snide comments. From me. So I do. And, as is nearly always the case when I'm out and about, I take a few pictures with my cheap-but-sturdy camera.
I love this shot. I feel happy looking at it. Screw photographic skill, people. It's the feelings that matter. 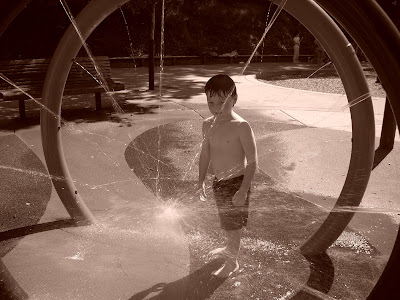 Don't say "screw photographic skill"--you got skilz, baby! Ha. But, yes, it is the feeling that matters.

My god, this is really an excellent photo....

Carefree days of a kid playing in the water! And I agree with the above, it really is an excellent shot. Both with skills and emotion. Well done.

(I'm a poser too. We should have some sort of Poser Club or something.)

I didn't know you had re-opened comments, or I would have been leaving more of them!

I love that picture. I also get what you mean about being a "mom-poser." I'm contributing to a moms blog now, and I'm still not sure why they let me in.

Nice photo. Regarding the comment about "posing as one of them" I want to know, how do you determine who is one of them? Maybe they are all posing, and there is no such thing as "one of them".