...was a lousy cold. Eldest is going to extend his mini-vacation for at least another day, lounging about in bed or playing Xbox or watching inappropriate TV shows. By "inappropriate," I mean the opposite of Teletubbies.
The kids, as he and I call Daughter and Youngest, loaded up on stuffed animals and Indiana Jones kits whilst at the Happiest Place on Earth. He loaded up only on the attention of his Aunt Ginny. And, like the kids, enough junk food to sink a Finding Nemo submarine. But it's not junk food that brought him down nor was it the evil Zurg. 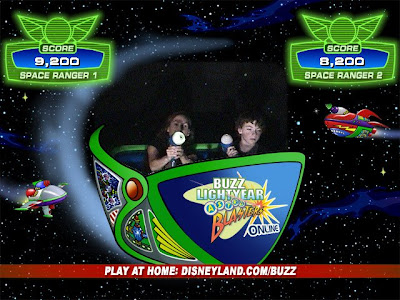 It's just a plain ole germ to which he has no immunity. Ain't that what it's always like when you travel? You're minding your own business and a cold virus hitches a ride on you while you're waiting for another go on Space Mountain.
The absolute worst part of all of this is, of course, that I'll be the next to fall victim to it. Because, as always, it's all about me. Speaking of me, note my own stellar score compared to the scores of the two boys who purportedly know how to shoot aliens. Hell, I kicked their butts and my sister's, too. I'll save you Buzz! 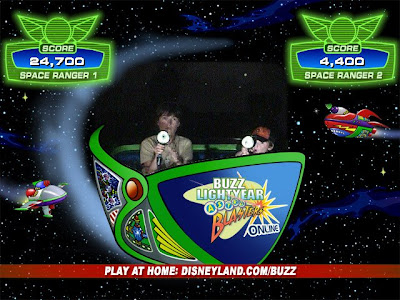 Woah. You rock! That score is smokin'!

I hope Eldest feels better pronto and you manage to escape the germ's vile clutches!

And I LOVE buzz. When my sister and I went to Disney pre-kids, we played it over and over again for an entire day. Seriously. So. much. fun.