The farmers' market held one evening each week starting in May officially closed last night. It's hard to tell by the weather that it's the end of summer, but the calendar has deemed it so.
Youngest and I wandered around for the last time while his sister was at dance class. Thankfully, we arrived early enough to miss the petting "zoo" and pony rides. ["Zoo" as in a couple of chickens and rabbits. Just enough contaminants to call it a zoo.]
It's never too early for the bouncy castle, with its built-in slide. Surely, he's too big for this. [Hey, stop calling me "Shirley," or you'll blow my cover.]
But he's not too big for it. Whereas to me it doesn't seem that long ago that he needed me climbing up the stairs behind him, pushing his diapered-butt ever upwards, to him, that was half a lifetime ago. Now, he scrambles up and propels himself ever downward, graciously stopping long enough to let me get one clean shot off before he's at it again. 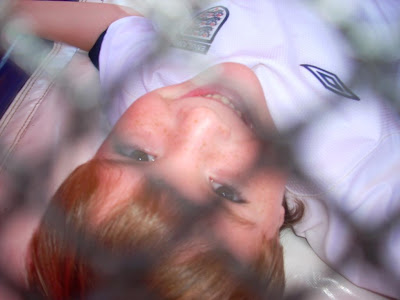 At least he stops for a nano-second for you to get a shot P, mine doesn't even do that. OY.

Airplane! I need to see that movie again.

What a great shot! A good time had by all.