Picture this: the five of us out for dinner one recent Saturday night. [It would have to have been a Saturday night because Pete has been working in Phoenix for something like eight weeks running now, leaving at 5:30 a.m. Mondays and returning at 7 p.m. Fridays.]
Unusual only in that the kids are behaving themselves. And when I say "kids," I am of course referring to demonic Youngest. Everything is fine with his world at the moment, so he torments no one. In fact, he begins to amuse us all. And once I make the mistake of saying it looks like it's a hat drinking that soda, that is pretty much all we see for the rest of the meal.
Which really isn't so bad. 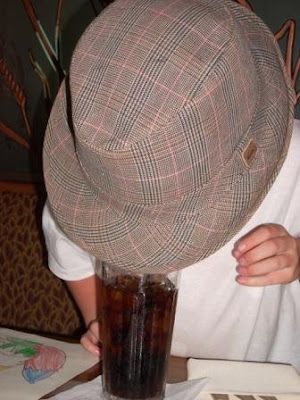 HAHAHAHA! God I love that kid!

That's quite simply a fantastic hat.

Wow you have had lots of drama in your life during the past week or so...too many to comment on, but...wow. W. O. W. Hope it all gets resolved, including the elbow...