Daughter is a performer. At 10, she doesn't have doubts about her abilities. She can sing. She can dance. She can act. She can. There is no fear within her. Offer her a stage, and she will take it.
She joined a children's theatre group aimed directly at kids like her (and their ever-indulgent parents). It's called Broadway Bound Kids, and it takes a couple of hundred bucks from each of 150 suckers and stages musicals. Daughter has only done this twice, which makes her a bit of a newbie compared to some of the kids I know who are on their sixth or seventh or tenth show.
They rehearse one hour every Tuesday night for four or five months, and then they cram a tech week of rehearsals in leading up to oodles of performances over a three- or four-day period. Somehow, they pull it off. (I'm assuming the leads put in a bit more of rehearsal time than the background crowds do.)
Daughter's first show was Peter Pan, and she adored it. She made a point of bugging the director/producer/moneymaker over the course of several weeks for a speaking part, and she got it. Not a big part, but a "role" nonetheless.
This last show was High School Musical. Yeah, blech! I hate that movie. I hate that soundtrack. I hated the professional performance I saw not that long ago. Yeah, not a fan. But I am a fan of Daughter's, so I went. Twice.
The things we do for love. More specifically, the things I do for this love: 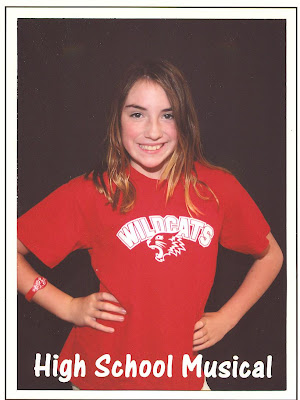 I love this ... I have fearless 9 and 12 year old daughters ... and I know this kind of love & support we give our budding actresses, artists, sports stars, etc.

p.s. I'm not diggin' the whole High School Musical phenomena either, but I'll be at the 3rd installment of this Disney franchise this opening weekend - ack!

How nice that she knows what she wants, knows what she likes, and is fearless about "going for it" and plus to have the tenacity to bug the director for a bigger part...good for her. I see a budding star in our midst! And good for you for supporting her passion. Even if it is High School Musical. For now.

I can see it all in her face! That confidence! The things we do for love, huh?

Maybe our girls will meet up on Broadway one day. We have something similar to that here. Only, it costs over $700 to participate. Yeah, my daughter has never participated.

Will you still love me if I tell you that I adore High School Musical? I'm anxiously awaiting 3!

doesnt she look grown up! hope things go well for her.
best of luck sammy.
miss u all.

Your daughter sounds like my daughter! Fearless and born to be on the stage! Isn't it fun?

My kid is not yet five but I've been inculcating her - High School Musical is bad!