It's always the way, right? Whenever we see a child misbehaving, we always look to the mother to explain it away.
Not waiting his turn at the swings? Mother's fault.
Pushing other kids down in the sandbox and taking their toys? Mother's fault.
Pitching a temper tantrum in Target? Mother's fault.
Throwing his food and refusing to sit down in a restaurant? Mother's fault.
Donning a Medusa head in the candy store and yelling, "OH NO! SNAKES ON MY HEAD! GET 'EM OFF! GET 'EM OFF!" Where is that mother?
That mother, having just done the exact same thing, modeling said behavior for Youngest, is busy snapping away pictures, laughing. 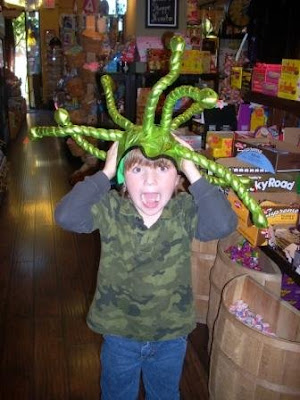 [And, for the record, might I just point out that my precious children have never been the ones not taking turns or pushing other kids down (except a fellow sibling) or pitching a temper tantrum in a store or throwing his food at a restaurant (except as a little baby when such actions are often construed as "cute"). Well, maybe when they've been with their father.]
at October 29, 2008

Either way, you guys would totally fit in at our house and you are more than welcome to hang with us!

Because you taught them not to, right? Mean people suck is my bumper sticker...I know that doesn't apply to you!! Adorable photo!

That is the cutest picture of a kid with snakes on his head that I have ever, ever seen.

Another mom setting a fine example for her offspring - yes!! It's SO good to know younger moms are keeping the good parenting traditions alive.

For the record - that kid throwing food and refusing to sit down in the restaurant? His mother was right there, begging him to stop and wondering why she'd ever considered motherhood in her mid 30s, especially when she already had two kids practically in their teens.

Not that I'd know anything about that or anything.

I want one of those hats. I would so wear that to work ~ with my bunny slipper with the Big Pointy Teeth.

I love that pic!

I still blame my mother :)

HA! Yeah, MY kids would NEVER act up because of my stellar parenting skills.

I think it's important to instill a sense of fun. And a silly hat is a perfect opportunity for fun! You know that my kids would never act up in public too. ;)

Sometimes I act up in public....I wonder if people are thinking, "Where is HER mother?"

Oh there she is - acting up right along with me!!