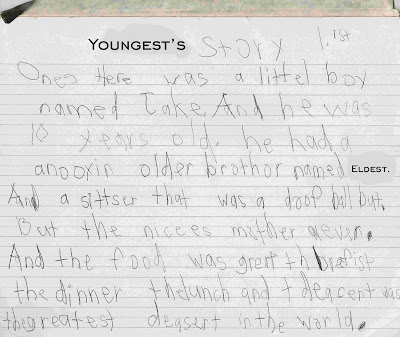 Recognizing that we're all busy people, allow me to translate Youngest's Story from six-year-old-ese to English:

Once there was a little boy named Jake. And he was 10 years old. He had an obnoxious older brother named Eldest. And a sister that was a doofball butt. But the nicest mother ever. And the food was great. The breakfast. The dinner. The lunch. And the dessert was the greatest dessert in the world.

The kid's got talent for weaving a tale, don't he? Just like his old lady.

That is an awesome story. LMAO... good to know where you stand in the family. Nicely done mom.

it's all about the food, baby.

I will be reading his novels one day.

Nice to know your cooking skills are still intact from those gourmet collage days.

Well, if my kids ever write glowing stories about me, they surely won't include my cooking!! Ha!

And does this brilliant tale-teller, really love your food?

Doofball butt. Thank you for this gift to my lexicon.