Daughter has never been a jeans wearer. She's always opted for cropped pants or shorts or skorts or thin cotton pants. I imagine some of it has to do with her sensitivity to some fabrics, an issue she has gradually overcome or outgrown. But most of the clothes she has are so damn thin that I fear the principal will be calling CPS soon enough. Damn, the girl tries to escape most days without a jacket. While I will grant that she doesn't feel the cold like I do -- it's the frigid British blood running through her and her siblings and her dad -- she still needs some heartier clothes.
So imagine my surprise when she consented to get some jeans last night. She even wanted two pairs! [Brings tears to the eyes of this jeans-wearing mama.] And so we bought them. And so she tried them on. And so they fit. And so I thought she looked spankin'. And so did she. 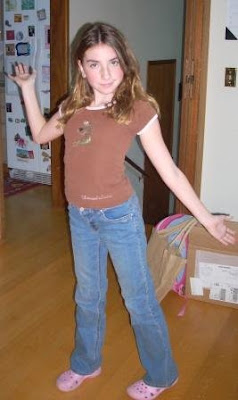 [Okay, the pose is funky, but the attitude is there.]
Not a jeans-wearing girl, my girl. Until today, when she agreed that she did like them. Quite a bit. And off to school she went. [Without a jacket.]
"Those jeans don't really suit you," one of her "friends" said, with another one jumping in to agree with the first.
If you've read my babbling at all in the last month or so, you know why I had to put quotation marks around the term. Yes, dear readers-so-bored-with-hearing-about-my-daughter's-encounters-with-fifth-grade-bitches, they're back at it. These are two of the same bunch of "friends" who messed with Daughter during her Student Council run. [I thought about linking to those earlier posts, and then I decided against it because it would just rile me up even more.]
I exploded. Granted, I'm operating on about 11 hours sleep in the past three or four days. But ENOUGH IS ENOUGH! I told Daughter those girls were mean bitches. Bitches. Bitches. And I must have used that word a dozen times.
I try to tell myself I might be overreacting. I try to tell myself I'm sleep-deprived. I try to tell myself I'm just generally sad right now. I try. But I'm failing to convince myself.
These were the opening words said upon Daughter's approach to her "friends." It's not as if Daughter asked, "How do I look?" Or that Daughter said, "Oh, gross, you're wearing that?" Or that she'd just run over one of their cats and sped away without stopping, laughing maniacally as she did so. Or that Daughter had done anything but approach her "friends."
We talked it through, once my cursing about mean bitches stopped, and we've come to the same conclusions as we did a month ago: there are friends and there are mean bitches. Let's go get us some friends.

Make new friends
and ditch the old.
One is silver
and the other is mold.
Kinda catchy, don't you think?
at November 13, 2008

Email ThisBlogThis!Share to TwitterShare to FacebookShare to Pinterest
Labels: horrible people, the daughter

OMG. That is too funny. Please tell us if she wears them tomorrow! Kevin's pants r way too short, and have 2 threads where the knees are supposed to be. He refuses to wear the new ones I bought. And jeans? HA! NEVER. But he did tell me, today, about the boys in HIS 5th grade who "have control over who is friends with whom", the "popular kids" and when I do yard duty nxt week, I better not yell at any of them or else they will make his life miserable. Of course these are the boys who are ALWAYS in trouble. What to do?

I know how you feel though - my eldest is so hungry to make a good friend and she can't find anyone who will stick. She gets so lonely and I feel like hell for her I really do, but I have always believed that it is better to have no friends than worthless ones.

Hope your girl has the savviness demonstrated by her mum and sorts through her crowd until she gets a goodie.

...and I am so sorry for Lori's little boy too

What? Jealous neanderthals. I happen to think they suit her nicely. How can jeans not suit anyone????

The movie Mean Girls doesn't even come close to how cruel some kids can be. It's scary how nasty even middle school kids can be.

Seriously, they jealous. She totally rocks those jeans and looks fabulous. kids can be so awful and hurtful. I'm so sorry she's having to put up with this again.

Why, why, WHY do there have to be Mean Girls in this world?? Your girl looks PRECIOUS in her jeans, and you tell her I said so!! And I know jeans, because that's all I ever wear!

Yes, I think some new friends are in order. Ditch the bitches.

I can't remember mean girls like that when I was growing up ... or is that just my bad middle-aged brain making it all nice and pretty for me so I can plug along?

Instead of labeling the other girls as bitches ... even if they are ... better to ask her how it makes her feel when her "friends" talk like that, and what she can say and do to deal with that. It's easy to call someone else names, but then we can sort of become like them by doing so.

It caught my attention when you said that he thinks it's a game, that may be when he was younger when he does that kind of stuff someone used to laugh. Dogs understand when people laugh that that makes them happy, and that may be a reason why he still does that. You need to show the dog that you are not happy, even a smile may encourage him to do it again, and I know it sometimes is very hard not to smile when your dog does something like that, but we have to do our best.
___________________________

Gosh, but sometimes I hate being a girl and having 3 of them, well, UGH - seriously, the mean-ness just doesn't seem to stop - although, my boy is coming home with stories of fist fights, in 4th grade, already.

Like kat wilder, I don't remember the meanness as being so overt when I was in that traumatic stage (okay, I'm still in it). She needs to find a new crowd, and there are plenty of un-affiliated girls around that she can probably find herself a group of her own. From my view as a high school teacher it seems that there are so many constellations that she will surely find those who love her look--regardless of what she wears.

My bitter black heart loves your new words for that sappy old song!

Mean bitches is so right! Sorry Daughter- I think you look fantastic in your new jeans.

She looks great in the jeans. Mean girls drive me nuts. We started dealing with them in the first grade!
(Sorry, I'm catching up on a week of missed blog posts!)