My memories of childhood visits with my grandparents are almost exclusively happy ones. I don't remember living with them, although we did for a couple of years, until I was nearly four. For the next five years, we would spend several weeks each summer at their home in Ludlow, Massachusetts. It was a wide expanse, with room to run wild in the fields, to pick blueberries or raspberries or rhubarb in Grandpa's garden, to play on the swing set, to swing on the porch swing, to eat fresh corn-on-the-cob, or to visit neighbors down the road or across the street.

Each time we left, my father would make us kids terribly upset, telling us that this might be the last time we'd ever see Grandma or Grandpa. "They're old," he'd say. Grandma would join in the act, weeping over our impending departure and the very real feeling that this would be the last time she'd see her son or grandchildren.

Grandpa died when I was 23. Grandma died when I was 35. All those heart-wrenching departures, first in Massachusetts when we left them and then in Hawaii and Virginia when they left us after month-long visits, caused such angst and left me so fearful. It was as if I couldn't be trusted to love them enough without having the threat of death hanging over their heads -- and my head.

* * * *
This is a picture of Pete's Uncle Ken and Aunt Margaret with the kids this past summer. The kids and I were ending our five-week vacation. Pete had left a couple of weeks before, and we were heading back home to the U.S. 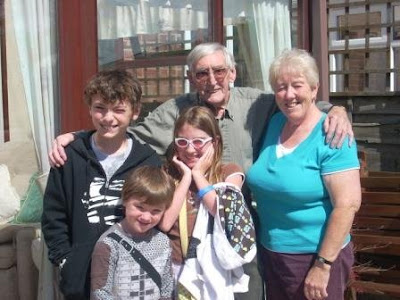 I can't adequately describe Uncle Ken right now. Perhaps soon. I can only say that there is a hole in our lives now.

Ken died earlier today. He was a medical miracle, outliving many a horrible prognosis, but he suffered greatly. The suffering ended for him today, finally extinguished. That provides solace to those left behind.

When we were leaving this summer, it was pretty clear that it would be the last time we would see him. The three adults knew, shedding tears and hugging fiercely each other and the kids. The kids didn't know. No one forced them to hug fiercely back. They just did. Because they love Uncle Ken and Aunt Margaret. And they said good-bye to them and threw in a "see you soon" or two. I know that is the right way to go.

Oh, I'm so sorry. I'm tearing up for you, but also so glad that you had an Uncle Ken in your family's life.

{{Hugs}} I am so sorry. I remember how fondly you spoke of him during your recent vacation. My heart is with your family.

BTW, I hope you don't see him too soon.

Wishing you and your family peace. Uncle Ken sounds like a wonderful man.