And a Happy New Ear!

She cried for a two-hour stretch last night, and then was up again at 4:30 for another hour. My attempts at stopping the crying ranged from soothing and stroking to stern commands of "No!" to crying a bit on my own to soothing and stroking to leaving the room to stringing together litanies of profanities to soothing and stroking. I know I plugged my ears on several occasions, talking loudly to myself to drown out the noise.
My sympathy for her -- my sympathy for anyone -- is strong, but not strong enough in the wee hours of the morning. And patience wears thin when the one you're talking to is in no mood for logic. Worse still is when the one you're talking to doesn't even understand English beyond a few simple words.
How's that for honesty about parenting dogs?
My wonderful sister and brother-in-law came up for Christmas, bringing their dog Roxy. Mutton-head Corrie was over-the-top thrilled to have her around, and they played tug of war and playful bowing and other doggie games. They were getting along quite well until...they weren't.
We don't know precisely who started it. It doesn't matter, really. If anyone is to blame, I guess it's going to have to be the idiot who decided to give them each their Christmas present super-duper bone. Dumbshit decided the dogs were being so good that they deserved an extra special treat. Dumbshit forgot the old adage for dogs and toddlers: what's mine, is mine; what's yours, is mine.
Perhaps Corrie was taunting Roxy, saying in Doglish, "Ya wanna piece of me?"
The fight probably lasted no more than eight seconds. The humans breaking it up were smart enough -- even me -- to keep their hands free of the dogs' mouths while using other tools -- towels and shod feet -- to separate the fighters. Roxy had apparently gone Mike Tyson on Corrie, ripping off a part of her ear.
[Let me assure you as we assured Youngest later, "No, dear, her whole ear didn't fall off."]
I think emergency pet services cost the most on Christmas Day. Let's put it this way, folks, I think it might very well have been cheaper for me to have lost part of an ear yesterday. At least I have health insurance and the cost would be tax-deductible. [Don't think I'm not toying with the idea of claiming her as a dependent.]
So now we have Miss Trumpethead back safe and sound, whining non-stop because she's got the rest of her ear sutured up, bandaged to the top of her head, and a cone around her. She hates the cone, folks. And so she whines because she knows a pair of opposable thumbs would come in handy right now. [Thankfully, no thumbs are flopping on the floor along with the yet-to-be-found piece of ear.] 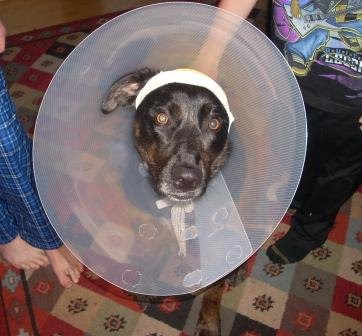 I hope your Christmas was brighter and merrier. And a happy new ear to all!
Just in case we need reminding about where her other ear goes, the outrageously expensive vet wrote it down for us. 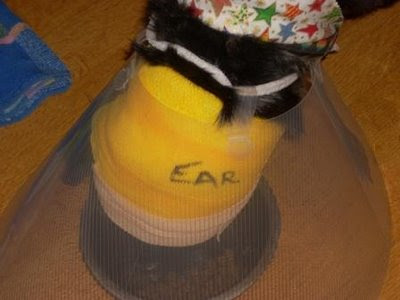 Oh...excuse me for laughing. Really, I am SO sorry.

But...the look on her face is just priceless.

Oh poor puppy!! I actually just purchased pet insurance for my Ruby because of a weekend, late evening, emergency visit when we thought she ingested chocolate. It covers illness and accidents. It's through the ASPCA. You might want to check it out!

Oh, poor Corrie! Lucky would sympathize, having been subjected to a conehead a time or two. Watch out for your shins, those cones can be sharp!

As I started reading, I was nodding my head in agreement about your night. I am the same way. And, dare I say, even the kids aren't immune to my cranky being woken up nature. My sympathy is in short order in the middle of the night.

Oh, poor puppy and poor you. If you spent all night up with the dog, you are a much better person than I am. I would have made someone else stay up with the whining dog.

Awwww - bless her heart!!! And I have total sympathy and understanding for that wide range of emotions you went thru during the night. I've been there with a dog - and been there with a kid. Emotions run about the same.

No, I don't think my kids are no better than dogs - I think my dogs are as great as my kids!!

My sympathies too: I've taken animals (and kids) to emergency clinics and I know how this feels! Still, the collar really suits that dog, and yes, the look on her face is priceless.

If it's any consolation, I got a piece of soap stuck in my ear once -- God knows how -- and ended up spending part of Christmas at a clinic in Tokyo. Getting soap out of your ear isn't as easy as it might sound, either.

Poor little puppy (she's a beauty, too!). They all hate the cones. My rotty had a cone to keep him from messing with his surgically repaired leg with the fresh metal plate. It didn't work. Cue 2nd surgery with bigger metal plate. That was 7 years ago. I'm still paying that one off.