Visiting the Trenches this morning, I realized I'd not posted my own feeble attempts at getting the Christmas card photo. [I don't mean to call her attempts "feeble." I'm talking about mine.]
You might remember our Thanksgiving week trip to Phoenix and how we were all set to go to the Grand Canyon but had to ditch because of the voluminous amounts of vomit spewing all volcano-like from the boys. Instead, we went on a hike up a very, very, very big mountain. That's where I had the brilliant idea to take the kids' photo for the card.
First up... 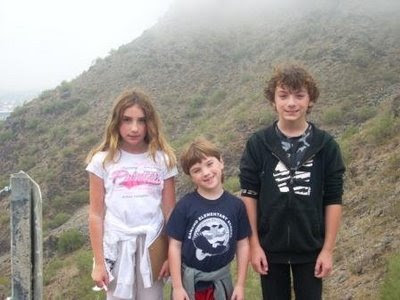 Then I made the mistake of suggesting they put their arms around each other. Daughter looks ready to die with Youngest's arm around her. Eldest would rather die than actually put his arm around his sister, so he settled for putting it around Youngest's neck. 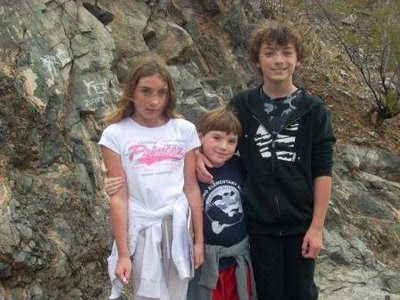 Then Pete stepped in and yelled, "Look at the chipmunk!" Thanks, Pete. 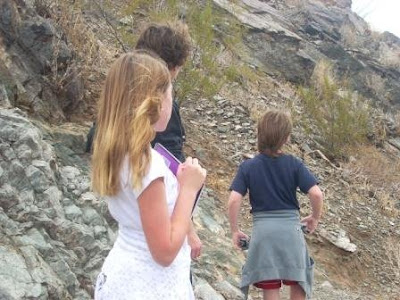 Finally, success, in a manner of speaking. 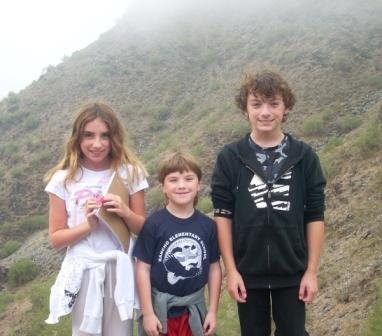 Very nice picture. I had to go with individual pictures of each kid because I had NOTHIN' with both together. And I only have two!

Oh that last shot is perfect! You're dong shopping???

LOL! Oh to get the perfect shot with more than one kid!

And, why, yes, I have finished my shopping! Whew.

I love that she is carrying her "journal" in that picture. I did that at that age!

That second one is a riot.

I like all the pictures actually. I haven't even attempted pictures yet and refuse to send out cards until after Christmas. I like to fancy myself as a rebel but in truth, I'm just lazy.

Your comment to my blog cracked me up. I really never thought about posting "fake" solutions just to have you try it. Ha. I just found my next post. Thanks.

Your kids are adorable and I love the sequence of photos, and their smiles at the end.

Shopping...what's that? When do I have to have it done by. I'm in so much trouble!

Oh, well maybe I should do a post about not having even tried. Sigh.

I don't even try to get pics of all of us anymore... it's too frustrating...

I always love the outtakes pictures (crying, nose-picking, etc.) better than the actual photo used for the card!