There's a non-profit foundation which raises money for our school district. It was formed a number of years ago, when budgetary cuts in the state caused axes to fall on a number of programs. The kind of programs people like me happen to like: music, art, science. We participate in its fundraisers and we give a bit extra each year because, hell, we can afford to and it's the right thing to do.
We stumbled across a fundraiser at the town's Christmas tree lighting a couple of weeks ago. A local store which my two youngest adore because it sells WEBKINZ!!! was selling raffle tickets as a fundraiser for the foundation. I bought 15 tickets for $25. [Hey, it's tax-deductible, right? And, we can afford to and it's the right thing to do.] You could choose to put your tickets into any of five baskets of toys and such. We threw our whole wad into the WEBKINZ!!! package, naturally.
What a shock it was to hear late last week that we had won the package. I mean, what are the chances? [Damn good when you pretty much outnumber all other raffle tickets for the package.]
Here, then, are my two happy, happy youngest children. Children who have not been able to buy anything or get anything for more than two months in anticipation of Christmas. Children who clearly know how to work the system. 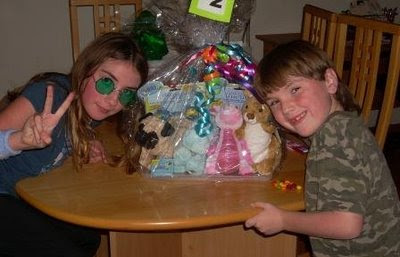 I love winning raffles. How awesome.

They are SOOOOOOOOOOo cute!

Awesome win! I mean the part about stuffing the box. :) My kids have yet to catch on to the Webkinz interest, and between you, me, and the internet, I'd be fine if they never caught on.

Congrats! How cool is that. Do you want to pick my lottery numbers for this week? Just saying... you being all lucky and stuff.

how awesome!!! prize winning is so much fun.

Fantastic! Congrats to Daughter and Youngest!