Wordy Wednesday #42: The Answer to Life, the Universe and Everything

It's my 42nd Wordy Wednesday, and everyone knows that 42 is the answer to life, the universe and everything. [I'm not going to make it easy and tell you why 42 is what it is. You'll have to Google that all on your lonesome.]
This lad is likely the culmination of life, the universe and everything. I like this photo a lot. I took it last week, after one of the lad's monthly baths, when he came back up in the pajamas he used to wear a lot by doesn't nowadays. Lately, he follows Eldest's lead -- who follows Pete's lead -- wearing the same shirt to bed that he wore all day and throwing on a pair of pajama bottoms.
But this night, he was duded up as a super hero, ready to help Santa. He was ready to do battle against any evil-doer trying to stop Santa in his quest to deliver presents to good boys and girls. And even to Youngest. [Last night, as I was beside him for a bit in bed, he said he thought he was the worst of the bunch. I noted that, in fact, mothers were supposed to be more patient and less tired so I won worst of the bunch. He noted that at least I tried hard.]
That front-tooth-missing, freshly bathed, freshly brushed, super-heroic Youngest really is the answer to my life, the universe and everything. 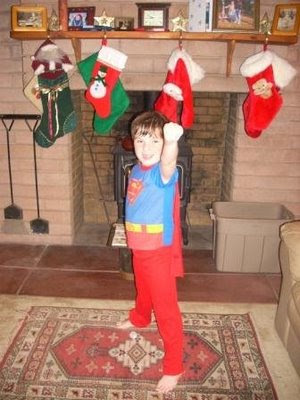 Is that ever the truth...wish everyone could see it as clearly as we do! When I see little guys like that I could break out in a tune of John Lennons Beautiful boy! He's a doll! You are blessed!

Don't you know you should never pickup Hitchhikers... I didn't even have to look that up.

That is a wonderful photo! I can see why he is your superhero.

Oh how I love this picture and the words that accompanied it. You know I feel the same about my Youngest.

42? What the heck is that all about? Nothing special about THAT number that I know of.

I feel safe with him guarding Christmas - now I can go to bed and rest easy. Thank you, Youngest, for protecting us!

Merry Christmas to you and yours, Patty!

I didn't have to look it up either, although it's been awhile. Suddenly I feel the need to reread it.