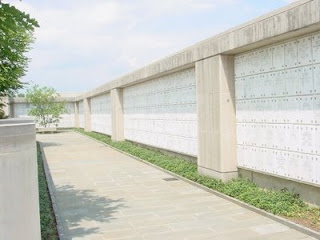 My father died on July 8, 1987. He was 56 years old. He left behind a stepwife and a stepson who was about to start college in the fall. His five adult children were as near as across town and as far away as Turkey. His spunky mother was nearly 86, living in Massachusetts, on her own for the first time in her life, having been widowed 18 months before. There was a brother and a sister. There was an ex-wife, my mother, who remained the love of his life.
They all came to Cocoa Beach, along with a handful of nieces and nephews. Most who came to town attended the funeral. A select few did not.
He was cremated. His mother took a jar of his ashes home in a baby jar. So did his youngest daughter, yours truly. His mother buried the ashes in the dirt six feet above her husband's coffin, where she herself would be buried -- stacked upon Grandpa -- more than nine years later.
The bulk of Dad's ashes can be found in Arlington National Cemetery, in the Columbarium. I don't know the exact date his ashes were interred there. None of us attended that ceremony.
I know why I didn't. I had no money to fly from San Francisco to D.C. nor did I have any more time off, having already spent any vacation/sick/bereavement time and money I had going back and forth visiting him in the three months between his diagnosis and death.
As soon as I could, in October 1987, I flew to D.C. to go to his grave. I couldn't have picked a better day for such a pilgrimage. Still reeling and with guilt piled on top for having not somehow made it for the interment, I happened upon the Columbarium at the exact moment another interment was beginning. I stayed on the edges and watched, imagining a day about 10 weeks earlier where ceremonial soldiers laid to rest a different person.

[Photo courtesy of Arlington National Cemetery.]
[Go on others' pilgrimages at Sunday Scribblings.]

"His five adult children were as near as across town and as far away as Turkey." Such a wonderful metaphor! How sad life can be, my dad died in 86 at 66, six weeks after my daughter was born...It's too early isn't it? I haven't posted but there is similarity that rings true about our pilgrimages. Wonderfully written as always!Albeit sad...I am glad you got to share a spiritual moment at the grave.

I think this is nearer t a real pilgrimage than some of the others.

This should be the true meaning of pilgrimage.

God knew your desire and gave you a moment where you could imagine. I love how God works.

I hope the guilt is gone. Using your time & money to visit your dad between his diagnosis & death was much more needed than attending his interment.

A pilgrimage, so true. Well written and wisely defined.

this is so moving and so well written Patois.
so sad that he passed so young. I am so sorry for your loss.

The time and money were much better spent visiting while he was still alive. And you attended the funeral which allowed you to be with your family. I am so sorry for your loss especially with your father so young.

And what an important pilgrimage this must have been for you, even if it wasn't on the exact time.

This is the finest use of the prompt I've read.A beautiful though very sad piece.

All little girls love their daddies and miss them when they are gone. My dad has been gone for near 9 years now and I still think of him every day.

this piece made my eyes dribble some over lost chances, forever gone --- a stirring post!!!

this is so moving. you did right to spend your resources while he is alive, in my opinion.

"A select few did not." His second son, the one living across town, was instructed not to attend, because he and his father were estranged at the time of his death. And his oldest daughter, showing solidarity for the brother, and wishing not to show support for the proceedings without all the family being allowed to attend, also opted not to participate. They say time heels all wounds. Me, I'm not too sure.

i know that no comfort is quite enough to replace the loss...yet you were granted "the pilgrimage" in every sense of the word and did well having spent it all in his life.

To say this is a moving post would be an understatement.
I hope being there, finally, brought you peace. I'm sorry you lost your dad and at such a young age. I hope being there at the time of another's ceremony, let you experience the honor your father deserved and brought you some comfort in some way.

i hope that seeing the other ceremony helped 'tie' things together for you and give you the closure you needed. this is a great pilgrimage.

This was a very nice tribute post. I have an award for you at Writing is Like....