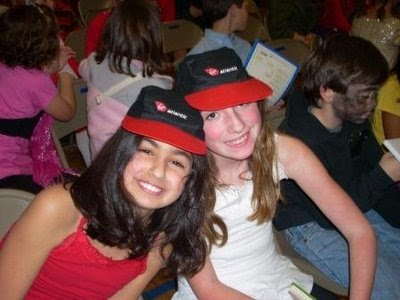 I've sung her praises here far too often. I really should just shut up about that girl of mine. The way I see it, I'm just offsetting the many times I will surely curse her antics during those mid-teen years. [Oh, dear God, please let her be like any of the girls I was friends with in high school. Just please, God, don't let her be like me.]
She's 10. She just celebrated her "half birthday" in school last week. Her fifth grade teacher told me she'd never seen a class so devoted to celebrating the half birthdays of those poor souls who will mark birthdays during the summer, allegedly alone and bereft without their 29 classmates around to eat a cupcake -- chocolate! or vanilla! frosting! or no frosting! -- and sing a rousing round of "Happy Birthday to You. Cha-cha-cha"
It was the annual talent show for the elementary school Saturday night. There was my girl, up on stage dancing with a friend to the gag-me-with-a-spoon tune of "Like, Whoa!" by once-and-future former-teen chickies Ally and AJ. She choreographed it herself. She taught the dance to her friend. She picked out the outfits for the two to wear. And she encouraged her friend all the way.
I mentioned her fearlessness following last year's talent show. What makes it even more triumphant this year? She's taken an outcast girl -- a girl dissed and teased by nearly all of her fourth grade classmates since she walked into kindergarten and was summarily dismissed as being "different" those many years ago -- and made her one of her friends. And has opened the door for her to join Daughter's gang of friends. A gang of friends which, it turns out, is filled with a lot of different people.
It's a cruel world out there. It can be a cruel world on the playground and on the talent show stage. Fearlessness and compassion and understanding. That's my girl.

Email ThisBlogThis!Share to TwitterShare to FacebookShare to Pinterest
Labels: the daughter

Wow, your daughter sounds amazing. I wish my daughter could find a friend like that. She isn't teased, just kind of ignored. That type of kindness is rare in preteens.

I love that she is willing to bring outsiders into her crowd. That takes a serious sense of self-confidence & she's going to be fine in the teenage years if that's the case.

Very cool kid you have there. Sounds like the world is a better place because of her.

You should be so very proud! What a girl. She sounds like a fabulous young girl and I am sure she will continue to impress you over her teen years as well.

That is wonderful. What a big heart she has. If only more preteens were like her :)

How awesome is your daughter! God I so hope LittleBird and LittleMan turn out that way. A huge high-five to you. You are obviously doing everything right.

Your daughter sounds so special and she certainly has been blessed with a wonderful mom!!
Hugs and Happy Birthday, G

That's your girl for sure. Like mother like daughter! :) Its really heartening to read stories like the one you mentioned of your daughter befriending someone who is so called 'different'. Moreso in the days when all you hear is how mean young adults can be.

Yay to your daughter!

She's a beauty, inside and out. She's also another young girl who I admire.