In my time doing this, I've probably been hit up 500 times by some hack trying to get me to help move their stuff. [Come on, I can say "hack" because I was one.] And I've never bitten. Not once. Oh, it's not that I haven't shared my thoughts on some product or store or annoying offspring. But I've not done so at anyone's beseeching.

Enter a rep for Mike Thaler, author of one of my kids' favorite book series. "The Teacher From the Black Lagoon" and its many offspring, particularly the ones about the gym teacher and the cafeteria lady, are hilarious.

Not two weeks before being contacted by Thaler's publicist, Youngest had checked out "The Substitute Teacher From the Black Lagoon" from his school's library. The lad reads on his own now, and these books are a welcome change (for me) from the "Magic Treehouse" series. [I'm not dissin' that series because it's awesome for the boy, but I'm definitely a "Black Lagoon" type of person, right?]

Thaler's new series is called "Tales from the Back Pew." The one I read -- or, should I say, the one Youngest read to me -- is "Preacher Creature Strikes on Sunday." And can I just say that I'm relieved that we really liked the book? How pitiful would it have been to finally decide to review something and then be stuck hating it? I do believe my reviewing career would have started and ended on the same post. 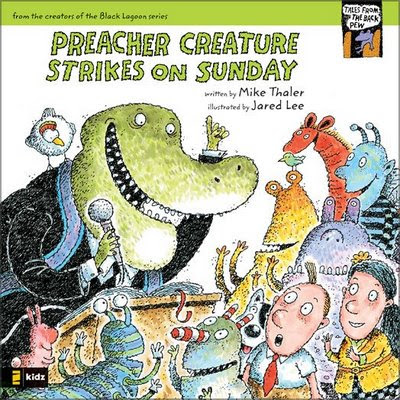 Do you really need to be told the plot? Kid's mom is going to drag his sorry butt to church. He's heard lots about what church is like -- stand up/sit down/kneel a hundred times; sit on hard benches called "pews" (and you know a "pew" has got to stink); listen to someone drone on and on for hours or days on end -- and it's about as unappealing as you can imagine. Kid gets to church and is pleasantly surprised.

Youngest laughed quite a bit and, I should probably be kind of ashamed to admit, agreed with some of the bad parts about church. [Dude, he's 6 and an hour in kid time, even just once a week, is an eternity.]

The illustrations and hidden gems on every page -- oddly drawn characters, side conversations, more jokes in the margins, upside-down beings -- were fabulous. This was totally in keeping with the "Black Lagoon," which is no surprise given that the books are illustrated by the same artist, Jared Lee.

You'll have to count Youngest and me in as part of the chorus of "Amens" about this book. I'm looking forward to reading the other books in the series. [That's not necessarily a hint, kind Thaler rep.]

How about you? You want to win one? I've got two to give away.

Just leave me a comment by the end of the day on Fat Tuesday. [That's February 24!] You don't even have to say anything witty, really 'cause I'll randomly pick the two winners. Even spelling doesn't count.

That DOES look like a fun book. My kids - especially the boy one - would love it.

I've been pretty lucky - or unlucky, maybe - in having been offered a lot of pretty irrestible stuff. But SOME of it. Sheesh, people!

This looks like a fun book -- I've been picking up books here and there for GrandDolly and now that there's a new Grand something or other on the way, I'll have to redouble my efforts.

You should've put Fat Tuesday with Mardi Gras in paren. Hee hee. Can you believe I've never been pegged to do anything until about two weeks ago when I got asked to do a s*x toy giveaway...ME. I was floored.

Is it the end of the day yet? For honesty's sake, I feel morally bound to disclose that my kid can count on one hand the number of times she has been exposed to the church-going experience. ('course, she was born with seven fingers on one hand and eight on the other...ok, ok...no she wasn't! Um...does fibbing about that cancel out any points earned by my earlier full disclosure?)

Oh! Mike Thaler! He came to our school for an author visit a few years ago. Both my kids really liked the Black Lagoon series.

We've not read these books, but I might just have to look into it. Maybe I could win one (crosses fingers) and then we would know!

The suspense is killing me. I might have to go find my own copy before then. A week in blogging time is like, what...like a couple of months in real life?!

That is GREAT!!! I love the Black Lagoon books... and Church would have some great material!

This is great - a chance to win a book and I can now call my looney pastor the preacher creature...something that he will find absolutely hilarious. Really... he will.

I'd love to win one of these...My grandson is 6 and has a cool sense of humor - think he'd get a big kick out of it.
Good post.

Oh how very cool!! i love the Teacher From the Black Lagoon :)

I love a great children's book.

oooh how exciting! My son who is studying to be an elem./special ed. teacher... has begun a book collection for his future students and it would be so exciting to win this for him and for them!
I've never heard of this series but I bet he has. thanks for the chance Patois!
hope all is well

That sounds like a great book. Of course, my kids have been to Sunday morning church, um, twice. We've done Christmas Eve services and Easter things. Chalk it up to spending every Sunday morning and evening and Wednesday evening in an oppressive judgmental fundamentalist environment for 12 years of my life. Plus 8 years of that in an oppressive judgmental fundamentalist "Christian" school.