I mentioned about a week ago that we'd spent quite a bit of time the weekend before with crafts. Maybe one of you asked for photos.
The hearts we're giving out as chokers to all the women in the younger kids' lives ended up looking like this: 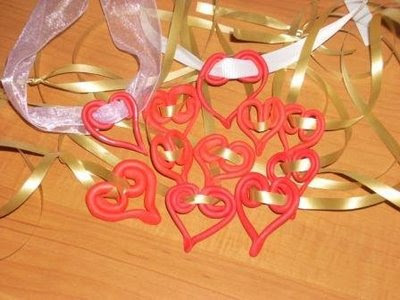 Not bad, really. The fly in the ointment? Daughter is sick and likely won't be going to school tomorrow for the VD celebration, which is the last day of school for quite awhile, it being what we rich folk call "Ski Week" around these here parts. What does this mean? If she's not in school, I'm going to have to go give her chokers to her friends, her teachers, her principal and her CRUSH. That should be fun for me.
Here's the Sphinx Daughter made with some Quikrete molds cut down by her dad, newspaper galore and papier mache: 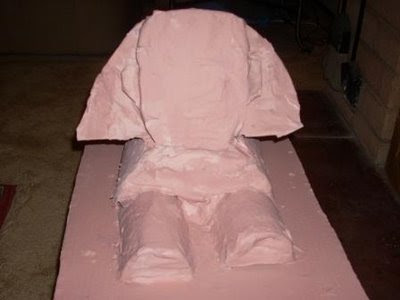 The face was later painted but I forgot to get a picture. I suppose I'll have to pull out my old Instamatic at the Girl Scout event where this will be unveiled. Daughter's take-away from all this? "That goop felt like vomit." Now, go on, eat your next meal, readers.
Finally, the volcano Eldest made with assistance from Pete: 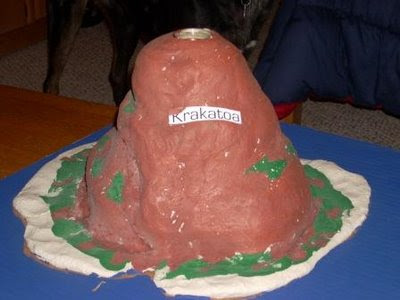 All done with homemade dough -- not much different than my pancake mix, come to think of it -- molded around a plastic bottle and then painted. And, yes, it did explode as expected during science class. Everyone who used the old vinegar-and-baking-soda standard volcanic mix had success. Those innovators with the Mentos and Coke? None worked.
So, now you know how we burn daylight on yucky weekends.
at February 11, 2009

that's amazing, love the chokers. We barely got paper valentines done in time for this friday. extra time with days home sick from school. Bah.

The chokers are very cool.

We've got the sickness over here, Mr. P hasn't been to school all week. :(

Those are awesome! I've always wanted to make a volcano. In due time, I guess.

I hope the sickies go away in time. Those are adorable chokers.

I'm sorry Daughter is sick. :( I hope she gets better quickly. Everyone is sick, it seems. They are dropping at school like flies. I'm afraid.

OOoohh... cooool. I want to come over to your house to play.

Love the hearts. What a fun way to spread the love! Hope daughter feels better by MONDAY!

um that Sphinx is awesome!!