They were married by a county administrator on the opposite side of the country where they resided. Somewhat of a whim, somewhat planned, the ceremony was short and to-the-point. No wedding bells. No long train of (off-)white. No butt bows. No monkey suits. Just two rings. And her mom and his uncle, aunt and family friend. And the two bastards, of course.
Dinner was at a seaside restaurant in the now-mother-in-law's hometown. The same cast of characters, plus the now-mother-in-law's husband. And a restaurant full of crab-eating, raucous diners. Down to the beach after dinner to play with the two bastards. Swinging them round and round and round and round. Laughing. Giggling. Until disaster struck.
Her ring, just hours on her finger and not yet fitted, was gone. Maybe flung with a child somewhere into the foamy ocean or the crunchy sand? Maybe in the dumpster with the remains of dinner? She was appalled. She was frantic. She was offering major amounts of cash to all the playing children to FIND HER WEDDING RING!
To no avail. Arriving at her mom's house empty-fingered, just as she had left it that morning. "It's a sign, isn't it?" she wondered to her new husband, silently begging him to laugh off her tears.
They did what anyone would do. They rented a metal detector and returned to the beach, scouring it for something pretty, pretty. They found ring tabs and coins and slugs and nails and everything but a ring. Minutes turned to half hours turned to hours. It was not to be.
And then it was to be, miraculously found just as the new husband and the now-mother-in-law were advising the new bride to give up the hunt. Lost, then found. 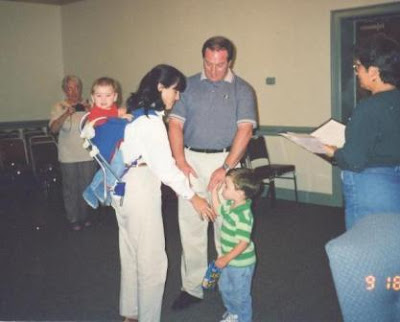 A most unusual experience that draws the attention.

Well told - a smile a minute!

I love the story AND the accompanying photo, especially the baby in the backpack.

also fits with your last post 'grace in small things'

OH Thank goodness!! is this a true story about you and your bastards Patois? hahaha
I would have felt so worried that the marriage was doomed! Nice lost/found post!

i actually know of a woman that this happened to... they are now divorced. she says it was a sign.

So glad the "lost" was found! Enjoyed the picture, too.

I am so happy the ring was found. I loved this and I love your story. The picture is perfection.