Tramp With a Stamp 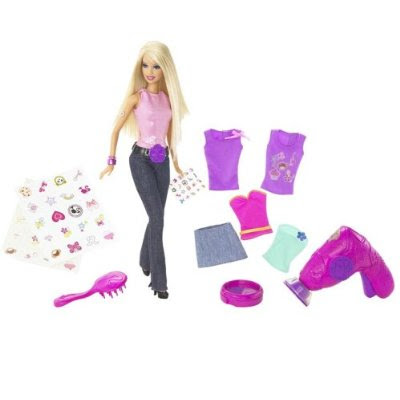 "I have two granddaughters, and I would never buy them that Barbie." So said the older woman interviewed by CBS radio yesterday. Who is that Barbie? Why she's the one who comes with tattoos. The reporter made mention that the tats could be put on Barbie or Ken or even the girl playing with dolls.
Why was grandma so upset? Because Tattoo Barbie isn't really the kind of role model she's seeking. The mini-skirt? The overdone tan? The unrealistic body proportion? The toe-walking? The fur? How about the one selling her wares of lipstick and eye shadow and blush? Apparently, that's the role model she wants her granddaughters to have.
Hell, Barbie is 50 this year. If she wants to go out and celebrate it with a tat, I say more power to her! This might finally be the one I buy for Daughter.*

[Photo originates with Mattel, which, by Barbie, had nothing to do with this post. You think?]

I'm fine with Tattoo Barbie. Did you see the one (it's based on some comic book character--which obviously I'm not up on) with black fishnets and a skimpy 1-piece swimsuit-type outfit? That one was a bit much, I thought. Or maybe not enough...

Last May I went off by myself for a weekend with my Mom and sister at a lake. We had a marvelous time. I paid dearly for this.
While I was gone, the Mountain Man took some kids to a friend's house. This friend has a 10-year-old girl and a 6-year-old boy and we often get hand-me-down clothes for which I am most grateful. When I got home, the kids were proud owners of not one, but five Barbies, plus some kind of little mini-me thing, a whole bunch of clothes and shoes (not complete pairs), and a pink remote control barbie convertible, which uses batteries at a rate of about 4 per second. The only saving grace is that I think they'll be bored with them soon enough, and I didn't have to pay for anything. We already got rid of the convertible and they didn't miss it.

A-men to that sister.

I saw a piece on this on the news and all the outrage and I was all like *whatev*.

Thankfully, my two oldest girls have outgrown dolls, so I missed all the bru-ha-ha and my youngest is not that into Barbies.

She's more into Littlest Pet Shop and big-bobble-headed stuff, you know, toys that get sucked up in my vacuum cleaner...YES...by mistake, of course!

Funny how you don't hear about the boy toys, like what my son plays with and how light sabers should be outlawed and such.

Damn straight. Barbie works hard for her money. If she wants a tramp stamp marked across her scrawny back, then so be it.

So that's what all the hoopla is about! I had heard people were in an uproar over Barbie but didn't know why.

I remember when my daughter still played with Barbie. They came out with one that came with a tattoo. She was quickly taken off the shelf.

Maybe I'm old or just numb to Barbie, 'cause it's the Bratz that really piss me off. Barbie and her tats seem mild compared to them.

Excellent post! I have very mixed feelings about Barbie, when I bother to think of her at all. She's not a big hit at our house. Sometimes I think it's just 'cause we don't get all the extras that actually make her fun to play with, and sometimes I think it must just not be my kid's thing. Not super concerned either way, though. So, tattoos-shmattoos...why start complaining there? You nailed it again, Patois.