Why I Shouldn't Stay Up Late

I'm an early-to-bed kinda gal. That's probably not stressing strongly enough how infrequently I stay awake until the 10 o'clock news. [Not that I watch the news anymore, but if I did, it wouldn't be a "late-night" one like 10 p.m.] The two younger kids go to bed by 9 p.m. I typically follow soon after, running down to Eldest's bat cave for the nightly nighty-night ritual by 9:15 p.m. so I can hit the hay moments later.
[Yeah, yeah, I do remember to brush. And gargle with Listerine. And take my statin. And floss every so often. And moisturize. Very important things to do, all of these, when you're an aging cow such as I am.]
I've been running around a lot the last couple of days. Don't ask me to tell you precisely what I've been doing, but I've been doing, man. I've been doing. So the pile of paperwork and what-have-you has inched ever sky-ward. And the lists of things to do keep getting longer. So I stayed up tonight to do...whatever. But then I remembered I wanted to see if some recent symptoms I've experienced have anything to do with, you know, a cancer that kills you in three days.
So I'm leaping from here to there to everywhere when I come across this after clicking some sidebar link on WebMD. 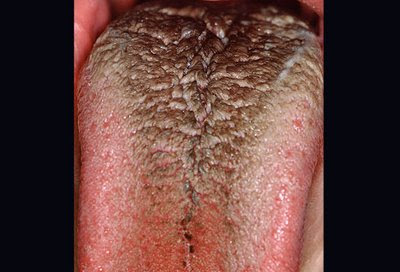 It's a freakin' black hairy tongue. Ewwwwww! There's a "painless" condition called Black Hairy Tongue. [No, that's not one of my symptoms.]
I guess this is the last time you'll pop over here, eh?
at March 30, 2009

That tongue is a hell of a way to draw in new readers!
Now what the heck is black tongue disease anyway? I'm too damned lazy to go look it up for myself, ya know.
So you'll have to post an explanation cause you know I'll be back to find out the answer to my question.
Peace.

Yes, yes, it may be the last time I pop by!
Eeeeeeeewwwwww!

Didja find out what's making you so sick? Is it missing me?

I hope you're better soon, that your stack of paperwork disappears and that you never never never have a tongue that looks like that!

Ewwwww....get that thing back in your mouth...lol....that should fool the newbies!! Stop taking photos of your tongue....is that hoofer mouth disease? lol... AGAIN EEEEWWWWW.....
Get YE to a doctor!!! And don't kiss anyone on the way!!!

That picture will haunt my dreams.

Good lord, honey, stay off WebMD. The Mountain Man got on there one night and decided he had 6 different kinds of cancer and 2 untreatable disabling syndromes.
And yes, that tongue is gross, but I had to clean up 3 different puddles of cat barf this morning. Perspective is everything.

Eeek, I am glad to hear you are not suffering from black hairy tongue. I hope it is also not the cancer that kills you in three days. I will check back soon to check on your health.

Ick, Ick! I'm so thankful that's one symptom you don't have (nor me). Ick.

I'm not allowed to get on WebMD at night. Strick hubby orders.

I don't know if I should laugh or throw up. Eww!